A reprieve, maybe short lived, from bad weather allowed for things to return to normal in the harbour today, December 7, with only a bit of swell remaining after last night's rain, thunder, lightning and wind. 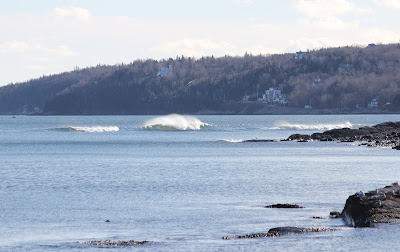 The high winds delayed the scheduled move of the American Roll-On Roll Off Carriers ship Tiger from Autoport to Pier 27 from yesterday afternoon until this morning. The ship was then able to unload its RoRo cargo and sail for New York without further delay at 1300 today.

On its way outbound, accompanied by the pilot boat Capt E.T.Rogers off its bow, it passsed the lobster boat Knot Lookin' Back out of Portuguese Cove.

The start of the local lobster season was delayed from November 30 until December 1, due to bad weather. Fishers traditionally load their boats high with all their traps for "dumping day" and risk serious accidents and capsizing if the weather is bad. They all want to get their traps in the water as soon as possible, and claim their own "patch". 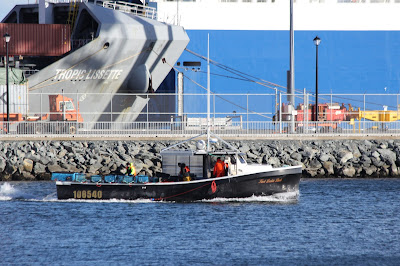 Knot Lookin' Back was built in 2018 by Hustler's Fibreglass Boats Ltd of Bloomfield, NS and features a port side shelter of translucent material. It appeared to be tending traps and placing new traps for the first time between Black Rock Beach (Point Pleasant Park) and PSA Halifax Pier 42. (Several traps were poised on the ship's rail ready to "launch").

At PSA Halifax Tropical Shipping's Tropical Lissette was finishing up its loading. 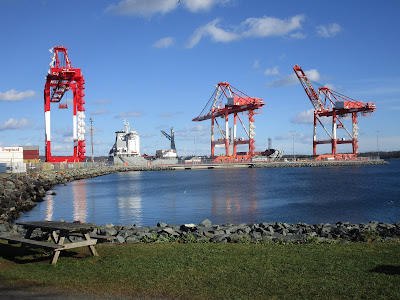 The ship arrived yesterday morning, December 6, and was scheduled to sail last evening, but was delayed until this morning when high winds prevented the cranes from operating.

Also in port, likely to shelter from bad weather, is the oil pollution clean up barge Fundy Responder which arrived from Saint John, NB in tow of the Atlasntic Larch on Sunday, December 5.

The barge was built in 1974 in Singapore as the AN 2803 and arrived in Canada in 1979 when Atlantic Towing acquired the tug Irving Teak (later Atlantic Teak and since scrapped) also from Singapore. It was renamed Irving Seal in 1980, then Seal VII in 1990 and got its present name in 2000.

It is owned by Atlantic Towing Ltd and works for Irving Oil as part of the Atlantic Emergency Response Team (ALERT) Inc, which is responsible for the oil industry voluntary pollution control program in the Bay of Fundy. They maintain a 10,000 tonne capacity for spill cleanup.

ALERT works with the Eastern Canada Response Corp (ECRC) which maintains a fleet of pollution control and cleanup craft in ports around the region. Halifax used to have a similar barge on standby in the harbour, but it was removed in 2018. After Imperial Oil closed its refinery, the risk of a large spill was greatly reduced.

The pollution cleanup barge John P. Oxley was towed out of Halifax for Sydney, NS by the tug Lois M June 9, 2018.

Some ships that had been waiting offshore will now be arriving later in the day, including EM Kea for Maersk/CMA CGM transatlantic service and CMA CGM A.Lincoln for the Ocean Alliance Asia-North America loop.