Where would the shipping world be without abbreviations, acronyms and portmanteaus? We would certainly be faced with numerous mouthfuls such as Orient Overseas Container Line and China Ocean Shipping Company Ltd or United Arab Shipping Company to mention only a few of the wordier outfits. They are among the many corporations that have, mercifully, abbreviated themselves to initials such as OOCL, COSCO and UASC thereby saving time, money (for paint if nothing else) and wear and tear on the tongue. For the most part these convenient abbreviations are a means of speeding up written communication, but aside from COSCO, defy easy pronunciation.

Today, December 14, was certainly a day for initials in Halifax harbour, particularly at the South End container terminal now known as PSA Halifax. The owners of the lease on that piece of port property were once the Port of Singapore Authority, but have long since outgrown that activity and therefore reduced themselves to another collection of almost meaningless initials.

Alongside at the terminal this morning were the container ships MSC Angela and CMA CGM Panama. The latter sailed at 0900 hrs, and once it was well clear of the harbour the MSC Sandra, which had been loitering offshore, moved in. It did not dock however, but went to short term anchorage in the lower harbour (possibly due to high winds). 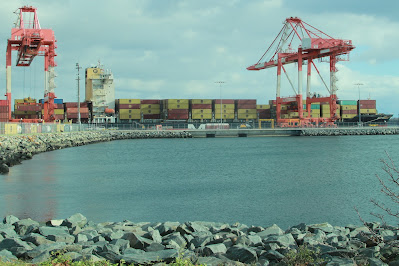 MSC Angela at Pier 42 had containers neatly stacked only four high, but was still too deeply laden for the St.Lawrence River, so was in port to decant some boxes before proceeding inland on the Canada Express 2 service from Spain.

The Mediterranean Shipping Company uses the MSC abbreviation as a convenient short form. Some of its containers carry the full name in small letters and also carry "MSC", but most now have the company logo of the letter M over a stylized wave, with SC below.

On the other hand CMA CGM does not use the long form names of its original constituant companies. The corporation was formed in 1996 with the merger of the Compagnie Maritime d' Affrètement and the Compagnie Genérale Maritime. Its CMA CGM Panama (see yesterday's post for details) would have a very long name indeed were it not for the abbreviation. 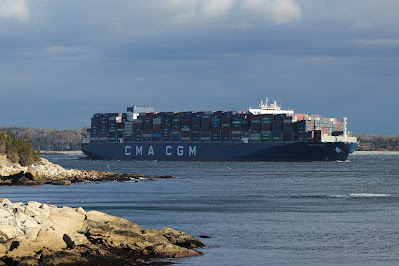 With its tethered escort tug preparing to let go from astern, CMA CGM Panama heads outbound for New York this morning. Yes it is taking a bit of a roll.

MSC Sandra arrived loaded to St.Lawrence maximum draft, and will "top up" once fleet mate MSC Angela sails. It is also on the Canada Express 2 service to Spain. 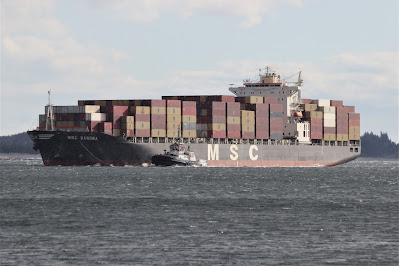 Making its way inbound for PSA Halifax, the ship was joined by tugs for berthing, but in the brisk breeze, it ended up going to anchor instead of trying to squeeze into Pier 41.