The general cargo and heavy lift ship BBC Europe arrived back in Halifax late afternoon December 20, a few days short of six weeks since its last visit November 12 [see previous post ]. In that time it has visited four ports as far as the head of the Great Lakes and unloaded some unknown cargo and loaded an unusual cargo.

On leaving Halifax November 13 it was reported in the St.Lawrence Seaway November 17 and the Welland Canal November 19. After waiting a couple of days at anchor it transited the Soo Locks November 22 and arrived in Thunder Bay on November 23. It spemt two days there before heading down lakes to Cleveland where it was docked from November 30 through December 1. It then passed up the Detroit River, Lake St. Clair and the St.Clair River again to Sarnia where it discharged the last of its cargo December 2 to 6. It took another four days to load, sailing December 11. [It may also have loaded at some of the other ports, but I don't have eye witness reports.]

Its outbound voyage was delayed by weather in Lake Erie where it was reported at anchor in the lee of Long Point December 13, before transiting the Welland Canal December 14 and the Seaway December 15. It then spent a couple of days in Montreal. From on line photos it does not appear to have taken on any more cargo there before sailing December 17. On arrival in Halifax this morning it tied up at Pier 9C North, tight up on the A.Murray MacKay bridge at the entrance to Bedford Basin. 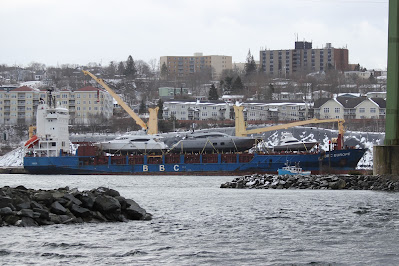 Armour stone pier protection from the Narrows bridge intrudes on the view from the BIO parking lot.

Part of the ship's unusual cargo was easy enough to see. It is reported to be carrying eleven motor yachts, five or maybe six of which are on deck. The boats are bound for winter quarters in the south and will be discharged at Fort Lauderdale.

As on the ship's previous visit to Halifax the launch Captain's Pride was nearby, indicating the likelihood of divers again, for some hull or prop maintenance. The ship was showing some new scratches and scrapes on the hull since its last visit, no doubt acquired in the many locks it has transited.

I could not see any reason why the ship's number 2 crane was unstowed  - it was not at work when I went by. Because the ship is barely visible from shoreside due to the miniature mountain of road salt stored under tarps on the Pier, it was not possible to see very much. Perhaps it had to resecure some of the deck cargo, or it was simply used to deploy a gangway.

There was other activity in port today too. At Autoport it was another visit from Siem Aristotle. The 7500 car capacity ship was last here on  August 9, 2021. 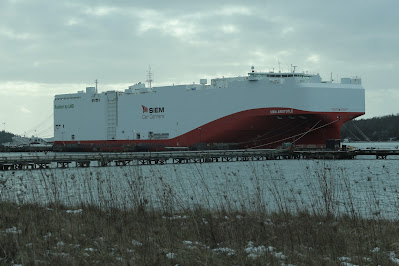 The "Super-Eco" ship uses conventional fuel and LNG. No telling how many electric cars were on the manifest - not too many I suspect.

In order to fuel our gas guzzlers, and perhaps to heat our homes, Imperial Oil brought in a cargo of refined products on the tanker SCF Angara arriving December 20. 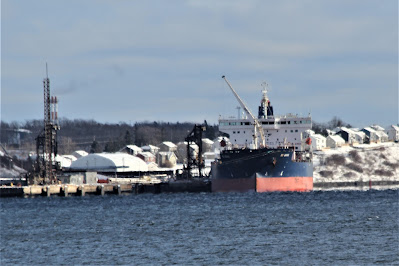 Unusual for Imperial Oil, the ship came from Amsterdam. Imperial's typical port in Europe is Antwerp, and Irving Oil's is Amsterdam. The ship is also somewhat unusual, as it ice rated to Lloyd's Ice Class 1A and has a variety of winterization features, including enclosed bridge wings. 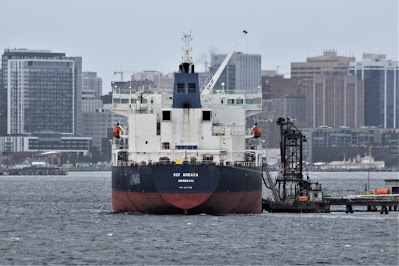 The enclosed bridge wings are most apparent from this view of the ship tied up at Imperial Oil dock #3.
The initials "SCF" in the ship's name represent Sovcomflot, the Russian shipping giant that has 133 ships in its fleet, of which 108 are tankers - 80 of them ice class. The ship was built as PRISCO Ekaterina in 2008 by STX Shipbuilding Co in Jinhae, South Korea. It is a MidRange III ship of 29,967 gt, 50,956 dwt and was acquired and renamed by SCF in 2016. ( PRISCO Tankers is the abbreviated form of the name used by the Primorsk Shipping Company, another Russian shipowning firm.) SCF has several name themes in its fleet. One theme is Russian rivers, and the Angara is a major waterway in Siberia, some stetches of which, between major dams, is navigable.
.
Another ship in port is the bulk carrier Sopot loading soy at Pier 28. As usual decent photos at that location are virtually impossible, particularly when the ship's hatches are open, as they were today. With the current dry weather, the ship should finish up loading today and sail under cover of darkness. 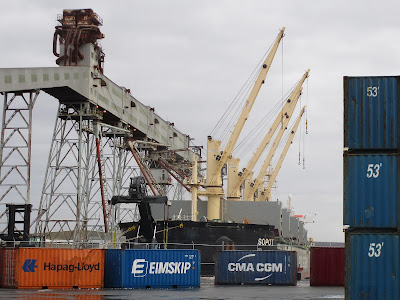 As usual, views of ships at Pier 28 are blocked in by the rapidly expanding PSA Halifax's container storage space. However it was possible to see several grain spouts rigged to load the ship, which had all its hatches open.
(Containers include some "bad order" boxes on the left and Oceanex's 53 footers on the right)
Built in 2019, the Sopot is the last of eight sister ships delivered by the Yangfan Group, Zhoushan to Polska Zegluga Morska (commonly known as PZM or Polsteam) the Polish shipping company. It is a 25,278 gt, 39,035 dwt ship equipped with four cranes. Sopot arrived December 16 (also in the dark) from Baltimore. Its destination is given as Ghent, Belgium.
.
Posted by Mac at 5:43 PM