Ships on the joint CMA CGM St.Lawrence 1 [ SL1] / Maersk Canada Atlantic Express [CAE] service generally arrive in Halifax from Montreal on Saturdays while they make the eastbound leg of their Europe / St.Lawrence route. Today's (Wednesday December 22) arrival of the Maersk Patras is therefore unusual, but understandable. This coming Saturday, December 26, is the Boxing Day holiday in Halifax and would incur extreme over time rates for longshore workers, which is to be avoided. [While some countries have Boxing Day as the start of a shopping frenzy, the stores and businesses are closed in Halifax on December 25 and 26, and do not reopen until the 27 th.] 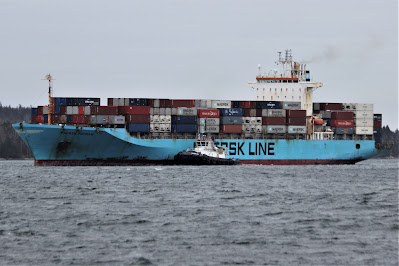 Maersk Patras is one of three sister ships on this service, along with EM Kea which is chartered on behalf of CMA CGM. All three were built by Kvaerner Warnow Werft in Warnemunde, Germany for P+O Nedlloyd in 1998. They were merged into the Maersk fleet in 2006 as part of AP Moller-Maersk's takeover of the Dutch company.

P+O Nedlloyd Marseille became Maersk Patras and has been calling in Halifax since 2010 when this port was added to the joint St.Lawrence River service. It is a 31,333 gt, 37,842 dwt ship with a capacity of 2890 TEU including 400 reefers. It is apparently well suited to the operation as it has run year round to support the weekly service, which is notoriously gruelling in winter.

A fourth sister ship was the P+O Nedlloyd Sydney which became Maersk Pembroke and was on this service until an engine room fire in August 2017 resulted in the ship being sold for scrap. The fifth sister ship P+O Nedlloyd Genoa was renamed Maersk Phuket in 2006 but has never been assigned to the SL1 / CAE.

Normally I might be predicting an announcement that the three sister ships would be replaced in 2022 or 2023 as their 5th special survey would be coming up. However with the hot demand, and high prices for ships these days, and Maersk's reluctance to order new ships, the trio may well soldier on for more than the usual 25 years after August 2023.