No Stripes on this Tiger

The autocarrier Tiger arrived early this morning (December 6) and tied up at Autoport to offload cars. It is scheduled to move over to Pier 27 later this afternoon to work non-auto "high and heavy" RoRo cargo. [Its customary berth at Pier 31 is occupied by Augusta Luna which is unloading nickel sulphides from Cuba.] 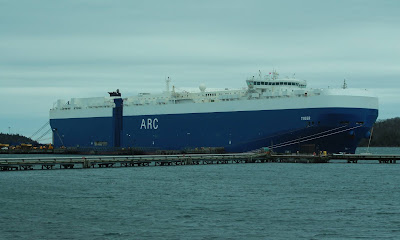 Despite carrying a Wilhelmsen name (beginning with the letter "T") and sailing under Malta registry the ship appeared in ARC (Atlantic Roll-on Roll-off Carrier) livery. ARC is a Wallenius Wilhelmsen Logistics (WWL) subsidiary headquartered in the United States and operating eight US flagged autocarriers. ARC's web site makes no mention of this ship or other non-US flag ships.

ARC's US flag ships have preference for US government contracts to transport vehicles and other cargoes. The company recently lost a contract for transporting military personnel household goods (it is appealing the award).

Tiger is owned by Wilhelmsen Lines Shipowning, is managed by Wilhelmsen Ship Management, and  operates as a regular member of the combined Wallenius Wilhelmsen fleet. All the WWL entities, including EUKOR and United European Car Carriers appear have pooled their ships for operating efficiency. So there is no apparent reason why this ship should carry ARC paint unless there is a plan to transfer it to US flag.

Tiger was built in 2011 by Daewoo Shipbuilding and Marine Engineering Co in Okpo, South Korea. A 74,255 gt ship of 31,143 dwt it has a large capacity of 7,934 autos and is equipped with a 320 tonne capacity stern ramp for heavy cargo. It also has the customary, but little used side ramp.