As I have said many times, one of the great things about Halifax harbour is the variety of shipping that can be seen on any given day. Today, December 8, was therefore fairly typical. At the South End container terminal operated by PSA Halifax, the Ultra class container ship CMA CGM A. Lincoln put in another apppearance. 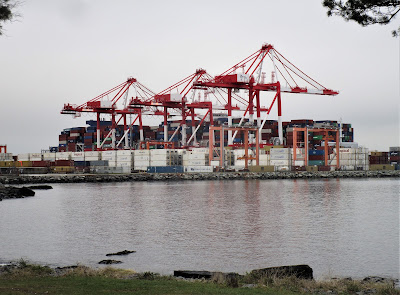 The massive ship, measuring 140,872 gt, 148,992 dwt, has a capacity of 14,414 TEU. When it visited Halifax for the first time April 14, 2020 it was the largest container ship to call here, but that record has since been broken by several other ships. (The current record holder seems to be CMA CGM Marco Polo at 16,020 TEU. These ships also set the record for largest ship to call in any Canadian port, and any east coast North American port.) PSA Halifax used its largest cranes to work the ship, which tied up at berth 41. Although there was room at Pier 42, for some reason the MSC Weser, which was also due this morning, did not enter port, but sailed on to Montreal after some hours at anchor. That ship is on the Canada Gulf Bridge service which usually only calls in Montreal, Corner Brook and Saint John. Its visit here was planned but not as a regularly scheduled call.

Arriving at Imperial Oil's number three dock, the Canadian coastal tanker Qikiqtaaluk W. made its second appearance in less than a month.

On its last visit November 21 to 24, it also unloaded at Imperial Oil. It then sailed for Sarnia, ON, for another cargo of refined petroleum products, passing up through the St.Lawrence Seaway November 28 and down again December 4.

Built as Icdas-11 by Icdas, Biga, Turkey it is a 13,097 gt, 19,998 dwt vessel. It was acquired by the Woodward group company Coastal Shipping Ltd in 2018 and normally serves arctic ports in the summer season. After unloading this time, the ship is likely to be reflagged to the Marshall Islands, as its sister ships Kitikmeot W. did last week, for winter work internationally.

Not all traffic in the harbour is commercial or civilian. There has been a fair amount of naval activity lately, particularly with the coastal defence vessels. This morning HMCS Summerside looked quite trim as it made its way inbound to Bedford Basin. 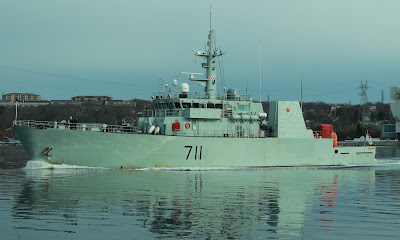 Summerside MM711 is the twelfth and last of the Kingston class Maritime Coastal Defence Vessels. It was built by Halifax Shipyards Ltd in 1998 and commissioned in 1999.

With a winter storm passing through over night December 8 - 9 and with significant snow accumulation possible, I do not expect much harbour activity (or Shipfax coverage) tomorrrow.