The Bahamas flag CSL self-unloader Sheila Ann arrived in Halifax to load gypsum today (December 27) after a lengthy absence. The ship has been operating on the west coast for the past several years, so it was bit of a surprise to see it in these parts again. 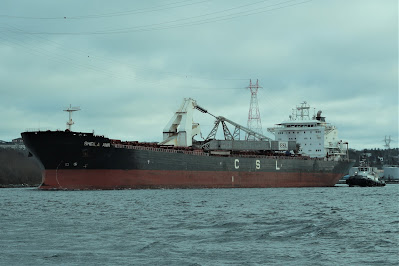 Tracing the ship's movements over the past year I see it was delivering aggregates from British Columbia to Redwood City and Los Angeles, California on a monthly basis until November when it was reported in Morro Redondo, Mexico, November 12-14. It then arrived off the Panama Canal anchorages November 23, transiting November 26 and arriving in Boston December 4-5. I'm not sure what cargo, if any, it had for Boston. The Boston suburb of Beverly, MA is the home port of CSL Americas Inc, the division of Canada Steamship Lines that manages the ship and the CSL self-unloader pool.

It then headed for Puerto Bolivar, Colombia where it loaded coal and sailed December 12-13. It delivered the coal to Point Tupper, NS December 21-24 and Sydney, NS December 25-26. (And yes Nova Scotia Power, the electric utility owned by Emera, still generates electricity by burning coal.) 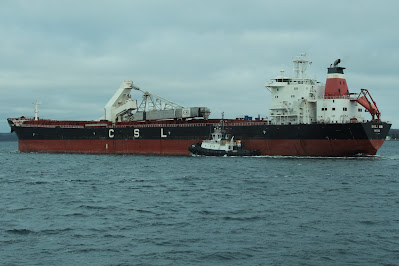 With the assistance of the tug Atlantic Fir, the ship makes for Gold Bond Gypsum's dock in Bedford Basin.

The Sheila Ann has a 79 meter swing out boom conveyor for discharging cargo.The boom has a telescoping feature which allows for a 69 m outreach. The boom slews through 135 degrees each side of midships, allowing for convenient positioning of the cargo on shore. The ship has seven holds with double hopper shaped bottoms, each feeding a conveyor leading forward to the single inclined belt conveyor that feeds the boom.

The ship is named for the Sheila Ann Martin (née Cowan), the wife of the former owner of CSL, Hon Paul Martin, and the mother of three sons who are the current owners of the company. Paul Maritn was also Prime Minister of Canada from 2003 to 2006.

CSL has recently acquired more ships for its international fleet, CSL Kajika and CSL Koasek. The former called in the Strait of Canso with coal for Point Tupper December 26 and is now anchored off Sydney. The latter is trading between California and Mexico. These acquisitions may mean more relocations of ships. CSL also has interests in Australia and Europe.