With Oceanex Sanderling in Amsterdam for refit, Oceanex is alternating its two other ships between Halifax and Montreal runs. Last week it was the ConRo Oceanex Connaigra making the Halifax to St.John's trip. This week it is the container carrier Oceanex Avalon. The ship arrived off Halifax December 29 and docked at Pier 42 yesterday, December 30, when a berth became available. 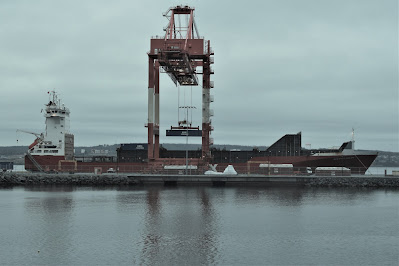 While tied up at Pier 42 it was possible to see that the ship has a hatch cover on number one hold only, while the remainder of the cargo space is completely open. A large dam aft of number one hold protects the open hold from incoming seas. The photo shows the ship loading one of Oceanex's many 53 foot long containers. Oceanex is one of the few shipping lines carrying 53 footers, which have now become common intermodal boxes in North America. Cellular container ships in international service cannot accommodate 53 foot long containers, although there is some suggestion that the US may promote such construction to speed up cargo movement and reduce re-handling.

Built in 2005 by J.J.Seitas in Nuenfelde, Germany, the Oceanex Avalon is 14,639 gt and 14,747 dwt with a capacity of 1229 TEU. It does not have RoRo capability, which is the reason for alternating the two ships until Oceanex Sanderling returns near the end of January. There is significant RoRo traffic including cars and trucks and transport trailers going to and from Newfoundland, and some RoRo capabiity is needed.

A ship that uses Halifax as its North American port in the winter made its first call of this winter season, arriving yesterday, December 30, first at PSA Halifax, then at Fairview Cove. CLI Pride makes regular monthly Transatlantic voyages from Rotterdam to Valleyfield, QC. With the St.Lawrence Seaway closing today, the ship opted to call in Halifax on this trip instead of being too late to make it in and out of the Quebec section of the Seaway. 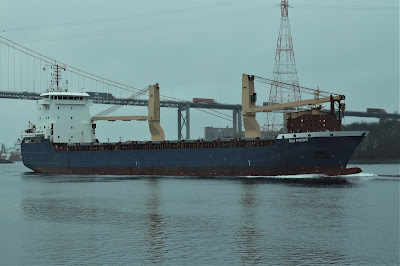 Built in 2011 by Donfang Shipbuilding Group Co in Yueqing, China as Brielle it was renamed BBC Luanda in 2014 and CLI Pride in 2018. The 7138 gt, 7821 dwt ship is an open hatch multi-purpose type with moveable tween decks. It is certified to carry moderately hazardous Type B cargo and has a pair of 8o tonne cranes.

Hamburg based operator CLI (Customized Logistics Ideas) has been bringing the ship to Halifax since 2018. They seem to have taken over some of the traffic from Atlantic RoRo Carriers (which no longer calls in Halifax) including containers of uranium hexaflouride. The ship also has project and heavy lift cargo capability.