Beans Out - Grain In

It has been an unusually busy time at the grain piers in Halifax. Unfortunately the weather was not cooperating for several days, causing delays for two ships.

The  bulk carrier St.Sophia arrived November 23 from Quebec City to top up its cargo with soy beans. That cargo is handled by the Halifax Grain Elevator Ltd and uses the grain conveyor system running from the storage silos through six grain spouts at Pier 28.

St.Sophhia was built in 2018 by Mitsui Tomano and is a 34,094 gt, 60,424 dwt vessel with four cargo handling cranes of unknown tonnage rating. Due to the moisture sensitive nature of the cargo, the ship could not load in the rainy weather over the past few days.

However it did manage to complete loading this afternoon (December 1) and sailed just at sunset for the Port of El Dekheila, in a suburb of Alexandria, Egypt.

Meanwhile the  Canadian bulker Radcliffe R. Latimer arrived November 25 from Thunder Bay with a cargo of wheat consigned to P+H Milling. The Halifax grain elevator provides storage space for the flour mill, and delievers the wheat as needed via a grain pipeline. Again, due to the moisture sensitive cargo, the Latimer could not unload in heavy rain. It was finally able to begin unloading today and will sail over night. With only a few weeks left in the St.Lawrence Seaway season, the ship will be heading back to the Great Lakes (via Lower Cove, Newfoundland). 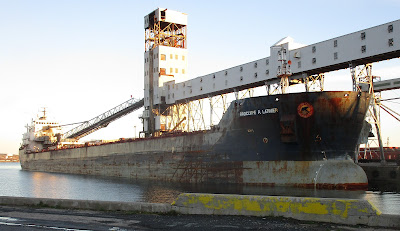 The Port of Halifax owns the grain elevator structures, and leases the facility to Halifax Grain Elevator Ltd. The silos were built as a grain export facility when the government of Canada subsidized rail freight rates to facilitate grain exports. 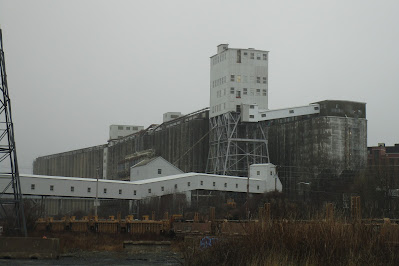 The following is an exerpt from a previous post:

"The elevator, consisting of 365 silos, with a total capacity of 5,152,000 bushels was built in four stages: 1925, 1929, 1958 and 1963. The first stage was but to replace the previous elevator destroyed in the Halifax explosion. Later stages were prompted by amendments to the Crow’s Nest Pass Agreement. That 1897 deal, between the Canadian government and the Canadian Pacific Railway gave the railroad access to valuable mineral properties in exchange for reduced rates to haul grain and flour eastbound - in perpetuity. Well perpetuity for governments is not for ever! The rate was suspended during World War I, and was revised in 1927 (after the government had formed the Canadian National Railroad) and then applied to grain only and to all rail lines. The CPR deal had favoured the Port of Saint John, but with the new CNR serving Halifax, a bigger grain elevator was warranted.

From the 1930s through the 1960s Halifax was a major grain exporting hub. In those days the entire St.Lawrence River closed for the winter and Halifax stockpiled grain and shipped it from January to April in huge quantities. Often the elevator was full. The port of Halifax owns the grain elevator and leases it to operators Halifax Grain Elevator Ltd.

As I said perpetuity does not mean forever with governments and the rate was adjusted in 1984 by the Western Grain Transportation Act, but it was capped. In 1993 it was eliminated completely and the grain trade for Halifax fell away dramatically. Traffic had been eroding anyway with the opening of the St.Lawrence Seaway, winter navigation on the St.Lawrence and better connections to the Mississippi and the west coast."

With the virtual elimination of grain exports through Halifax, the grain silos are used for storing quantities of grain for local consumption, such as P+H Milling. They are also used to store wood pellets for export to Europe as hog fuel, and more recently for soy beans, which are exported. The soy beans arrive in Halifax by truck or rail.


The Port of Halifax provides an excellent aerial photo on its web site showing the entire facility: