Thursday's heavy snow vanished over night Saturday / Sunday (December 11-12) as another storm blew through with thunder, lightning, wind and heavy rain. Snow removal is a huge headache for container terminals, and it is a time consuming and costly operation to clear and dispose of the white stuff. However when rain washes it away for you, operations can get back to normal very quickly.

MSC Leigh arrived from Montreal December 11 to top off  before setting out for Valencia and Barcelona on MSC's Canada Express 2 service. 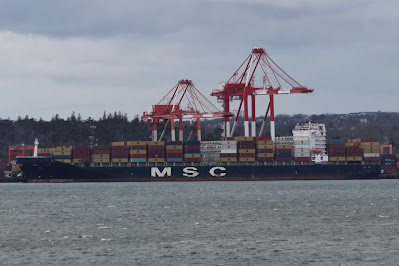 Things were also busy at Fairview Cove, with NYK Constellation arriving in the morning of December 11, and sailing mid-morning today, Sunday December 12. 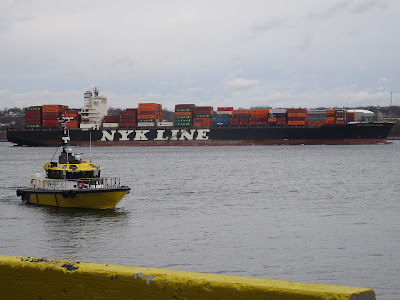 As soon as the NYK Constellation was clear of the berth, the Hyundai Faith began to move in. It had arrived late yesterday afternoon, December 11 and spent the night at anchor in Bedford Basin. 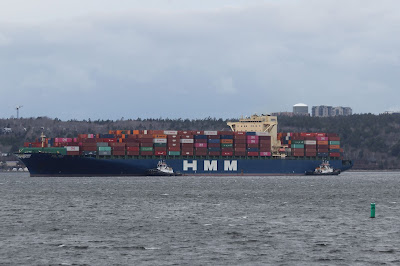 The HMM ship (Hyundai Merchant Marine rebranded itself as HMM in 2020) was built by - wait for it - Hyundai, Samho in 2008. The 95,681 gt, 98,967 dwt ship has a capacity of 8562 TEU. It is on THE Alliance's EC5 Asia-North America run and arrived directly from Singapore.
All was quiet in the rest of the harbour, but was considerably brightened in the "grey ship" zone, where HMCS Montreal was showing off its new, bright blue, anti-fouling hull paint. 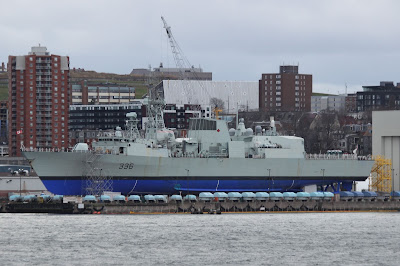 The ship is perched on the Syncrolift, an elevator - like platform that was built to lift ships (including submarines) out of the water, using banks of electric motors (the light blue objects), all carefully synchronised as to speed. The facility is being upgraded to increase its capacity for the future drydockings of new frigates (not yet built), but it does not have the capability of lifting the very heavy Arctic Offshore Patrol Vessels. They will have to be drydocked in Newfoundland or Quebec, or on a semi-submersible barge.
.