The debate rages on as to which ship is the biggest container ship to call in Halifax. The latest contender arrived yesterday and will be sailing from PSA Halifax this evening (December 27). 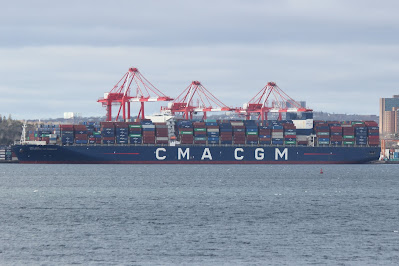 CMA CGM Alexander von Humboldt was built by Daewoo Shipbuilding & Marine Engineering Co Ltd, Okpo, South Korea in 2013. One of three sister ships with CMA CGM Marco Polo and CMA CGM Jules Verne. Dimensionally the ships measure 396.0*m length,  53.6m breadth and a depth of 29.9m and maximum draft of 16m. All have the same stated container capacity of 16,020 TEU. [*One sources says 399.0m for the von Humboldt but this is likely a typo.]

Gross tonnage, which is not a measurement, but a calculation based on a formula,  comes in at 176,546 for the von Humboldt and is the same for the Polo, whereas the Verne comes in at 176,435. [The Verne was due in Halifax December 25, but bypassed the port, with the notation "omitted sailing".]

While I believe these "biggest' arguments are a bit of a mug's game, I am declaring the CMA CGM Marco Polo the winner by a technical knockout, and still the champion.