The port was bustling again today, December 28, after a few slow days during the Christmas break.

Fairview Cove completed working the Atlantic Star this morning. It arrived last night on the westbound leg of its regular crossing. 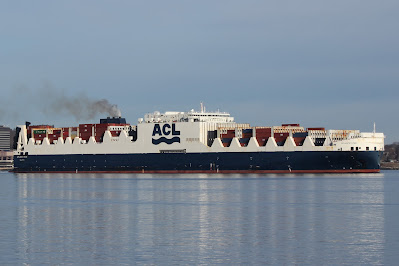 Sailing outbound this morning Atlantic Star had near perfect conditions.

Fleet mate and sister ship Atlantic Sun made the headlines when its anchor winch brake slipped and the ship started to drift off Almwch, North Wales on Christmas Day. The ship called for a pilot and stood off until December 27 when it was able to dock safely in Liverpool. It will be on its way to Halifax when the windlass problem has been rectified. The press report noted that the ship was in direct contact with the winch manufacturer while attempting (without success) to correct the problem.

After Atlantic Star cleared the berth at Fairview Cove the Conti Contessa was in position to back in alongside. 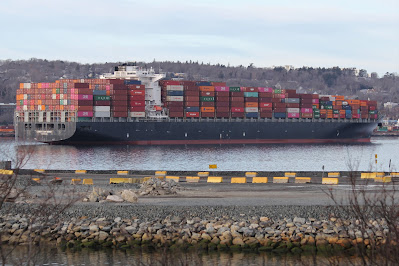 The Port is gradually filling in a large area adjacent to the Fairview Cove terminal to enable a pier extension. The facility also needs more backup space on land and some new cranes.

PSA Halifax was also full out busy with ships coming and going. MSC Angela was alongside, topping up on its Canada Express 2 service from Montreal. MSC Naomi arrived on the Indus 2 service. 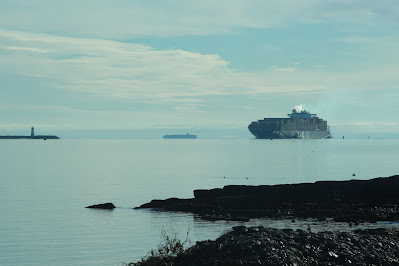 On its way inbound MSC Naomi passed the anchored ZIM Qingdao which is scheduled for PSA Halifax when MSC Angela sails.

MSC Naomi is a first time caller as the new Indus 2 service works its way through the roster for the first time. Built in 2015 by New Times Shipbuilding Co Ltd  in Jingjiang, China, it is a 96,333 gt, 109,510 dwt vessel with a container capacity of 8800 TEU. 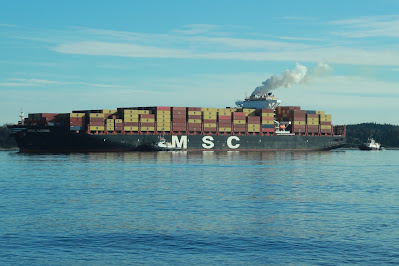 The ship's exhaust gas scrubber was working away leaving a large plume of water vapour which was eventually absorbed by the cool dry air. 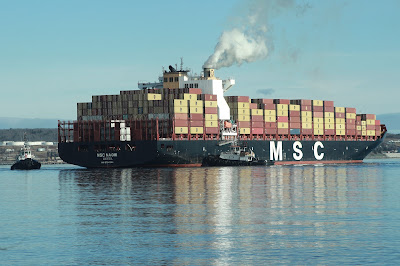 Scrubber retrofits no doubt take considerable ingenuity, but are usually clumsy looking. This ship's "side saddle" unit is no exception, but it did not take up any valuable cargo space.
Autoport was also busy with another visit from the Morning Peace which was here as recently as November 19. It sailed late this afternoon, as did the bulk carrier Sheila Ann with a load of gypsum for Tampa FL. (see yesterday's post).
.