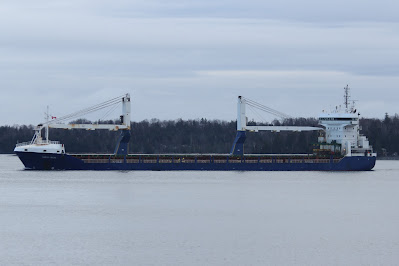 The ship was built in 2011 by Damen Yichang, in Yichang, China and is registered at 8,059 gt, 10,872 dwt. With ventilated box shaped holds, the ship can carry a variety of cargoes from bulk to project. Its two 80 tonne capacity cranes that can also combine for a 150 tonne lift.

The name reflects the Dutch base of Onego Chartering, and the headquarters of the ship's builders, however as of July its owners changed from Dutch to German.

CN imports its rail from the AercelorMittal steel works in Huta Katowice, Poland through the Port of Halifax, where it is stockpiled. It is then sent for processing to Winnipeg as needed, using special railcars. CN's 2021 capital plan showed 341 miles of rail replacement across Canada. US replacement rail is not included in that figure.

Main line rail is installed in continuous welded configuration, however for ease of transport from the rolling mill in Poland, it is shipped in 12 meter lengths and welded in Winnipeg or on site. Unloading the ship in Halifax is carried out using shore side cranes and the rails are stacked on the pier using forklifts.