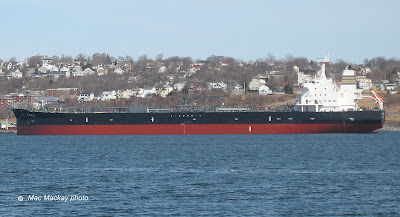 The tanker Axel lies at anchor awaiting its turn to go into Imperial Oil later today. Completed in November of 2010, the ship is almost brand new. It arrived from the Baltic in ballast and will go in to load after the departure of Algoscotia.
It is an oil products tanker of 28,465 gross tons, 50,090 deadweight and is operated by Asahi Marine Co Ltd of Tokyo. As with many non-domestic Japanese ships, it flies the flag of Panama.
It does show some signs of use -there are some rub marks on the hull from berthing, but it is otherwise quite free of mars and scratches.
.
Posted by Mac at 12:35 PM