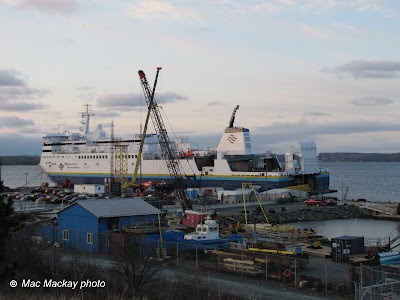 1. This morning, a crane is lifting one lifeboat aboard. A yellow catwalk runs from shore to the stern ramp. [That is Waterworks Construction's base in the foreground, with their workboat Walrus out of the water for the winter. It is a former BIO survey launch.]

2. Starboard lifeboats are in the falls and out of the water. The bow visor is also raised as work continues on the bow ramp.

Since leaving drydock March 9 , the refit of Leif Ericson has continued at the Woodside dock. Today a shoreside crane was lifting the port side lifeboats on board, and the starboard boats were in their slings. The bow door was up and the stern ramp down, with a gangway for workers to access the ship.
When it goes back into service later this spring it will apparently be used for truck traffic only, unless another ferry is out of service.
The ship was built in 1991 in Norway as Stena Challenger and acquired by Marine Atlantic in 2000 for delivery in 2001. It has refitted in Halifax several times. In September 2003 it arrived here and rode out Hurricane Juan in the Novadock. In 2004 its arrival coincided with Tropical Storm Ophelia, and it had to anchor in the Basin for a couple of days. The current refit started with the ship's arrival January 4, and is a major overhaul (what would be called a mid-life refit in the navy.)
Posted by Mac at 7:26 PM