Where are they now department 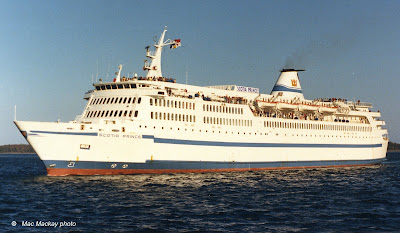 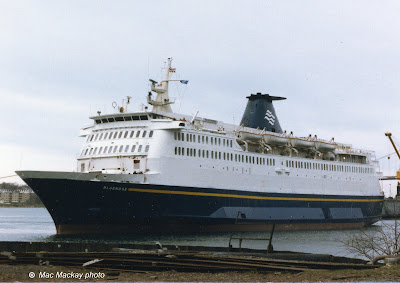 2. Bluenose emerges from the drydock for the first time in Marine Atlantic colours 1983-04-24.


Part 1
The ferry Scotia Prince, which operated the Yarmouth/Portland service until the end of the 2004 season has lead an interesting life. Built as Stena Olympica in 1971 by the Titovo shipyard in Kraljevica, Yugoslavia, it initially ran in the Baltic on such routes as Gothenburg-Kiel, Korso-Kiel and Gothenburg-Frederickshaven for Stena Lines. In had capacity of 886 berths and 634 deck passengers. More berths were added in 1974.
In 1982 it was sold to Scotia Prince Cruises Ltd of Miami, was renamed Scotia Prince, and began the Portland-Yarmouth sericve. In 1986 it was lengthened 18m., increasing gross tonnage from 7,118 to 12,087. Passenger capacity stands at unberthed 146, berths 1,054.
It was registered in Nassau, Bahamas, and operated on the NS-US route seasonally, with sometime winter service in various southern locations including Tampa-Progresso in 1999-2000. and Tampa-Yucatan/ Merida in 2002-2003.

The owners withdrew the ship from the Yarmouth-Portland service at the end of the 2004 season, following a dispute with the Port of Portland.

In 2005-2006 it was pressed into service for the Federal Emergency Management department and provided temporary shelter in New Orleans following Hurricane Katrina. It then crossed the Atlantic and operated a variety of Mediterranean routes including 2006:Tangier-Genoa and Oran-Alicante-Marseilles.
In 2007 Clipper Group purchased the ship and chartered it out to a variety of different operators. It ran 2007, 2008: Almiera-Nador and 2009: Almiera-Ghazout.
At the end of the 2010 season running from Ancona-Cesne it went into winter layup in Greece. Earlier this month it was announced that it was to be chartered to Flamingo Duty Free Shop Pvt of India, to run from Tuticorin to Colombo, Sri Lanka for fourteen months. It departed Greece February 18 and passed through the Suez Canal February 20-22.
However it was called back to the Med to evacuate 1200 Sri Lankan nationals from Libya to Malta. It was due in Benghazi February 27.

Part 2
A similar ship was built for Stena Lines in 1973, named Stena Jutlandica. Builders were "Jozo Lozovina-Mosor" shipyard in Trgir, Yugoslavia. It measured 6524 gross tons with a capacity of unberthed 1632, berths 168. [Tonnage was later recalculated as 13,179 when its vehicle decks were included.] In 1982 the ship was renamed Jutlandica, and it was under this name that it arrived in Halifax late 1982 to be refitted for new operators CN Marine (which became Marine Atlantic.) She operated under the Bahamas flag.
In 1983 it was renamed Bluenose, reviving the name of its predeccessor, and recalling the famous Nova Scotia racing schooner. (Not to mention creating endless confusion with its replica Bluenose II.) It went into service running from Yarmouth to Bar Harbor, Maine.
In 1997 the service was taken over by Bay Ferries and the ship ran for them to December 1997 and was laid up in Shelburne, NS and renamed Hull 309. [Her builder's hull number was 162.]
In early 1999 she sailed to Spain and became Euroferrys Atlantica running Algeciras-Tangiers. In late 2010 she was sold for scrap. A deal with Turkish scrappers apparently fell through and she was resold to Indian scrappers and renamed Ace II for her trip to Alang. She arrived there 2010-12-22.
There are noticeable differences between the tow ships, Bluenose has the extra car deck, and prominent hull sponsons to provid added stability. Scotia Prince was lengthened and this can be seen on the section just aft of the bridge where there are more vertical windows.
.
Posted by Mac at 9:36 PM