1. Sichem Paris displays some significant staining on her hull (it's not frozen spray) when she sails Saturday afternoon. 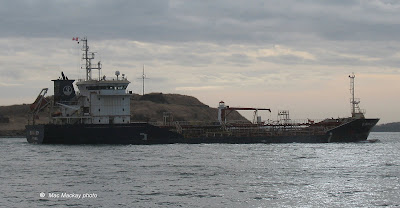 2. Burak Bey gets ahead of the photographer as she passes George's Island on her way out this morning.

Two more chemical tankers in as many days, but only one had Halifax cargo.
That was Sichem Paris, Singapore flag, 8537 gross tons, 13079 deadweight. After working at Imperial Oil she went to anchor for bunkers and sailed on Saturday. Is that just bad paint, or is it perhaps a souvenir of a caustic spill?

The other was in this morning for bunkers only. Burak Bey flies the Turkish flag, and measures a relatively small 3144 gross tons, 4622 deadweight. She was built in 2007. She topped up for her trip to Falmouth, UK (usually a destination where further orders are received for the next loading port.)
.
Posted by Mac at 9:15 PM