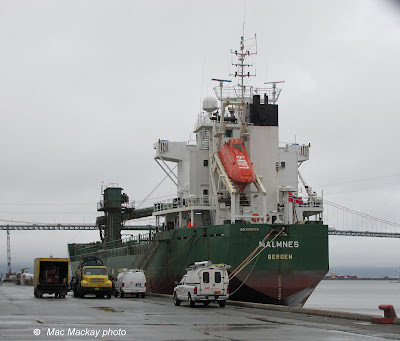 1. Malmnes at pier 9A with service vehicles alongside, including a suction truck and a welder.
.

The small self-unloader Malmnes, a frequent caller in Halifax for bunkers, this time tied up alongside pier 9A. The ship usually remains at anchor and is gone in a few hours. However about once a year it shows up for day or two and has some necessary tank cleaning and other work done.

Running pretty consistently from the Strait of Canso to southern destinations, it has been a regular since it was built in 1993.