Sault au Cochon to the scrappers

The barge Sault au Cochon will be broken up for scrap in Pictou. It was reported today that Aecon Fabco, operators of the Pictou Shipyard, will soon take the barge in hand and cut it up.
The yard has recent experience in scrapping, as they broke up the two warships Terra Nova and Gatineau in 2009-2010. 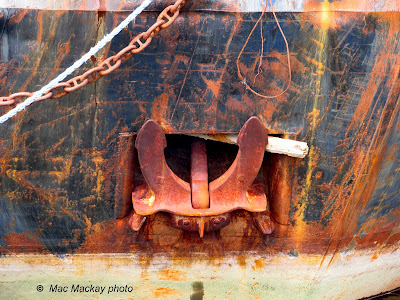 1. A piece of wood is jammed into Sault au Cochon's anchor pocket - a souvenir of her November grounding. 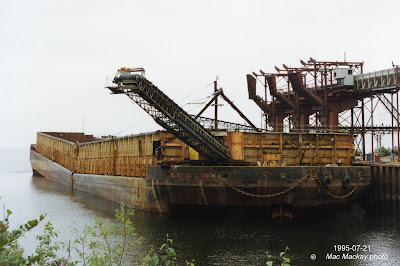 3. The barge sits at the dock in Forestville 1995-07-21 with a broken back. It was orginally built to carry pulpwood loaded by the long flume structure in the background.

Sault au Cochon was built to carry pulpwood from Forestville to Quebec City. Along with a sister barge Betsiamites and the tug Atlantic (later Laval and now Ocean Echo II) they were built at the Port Weller Dry Docks in 1968.
When that service was discontinued the barge was converted to carry sand and gravel. It saw extensive use on the construction of the Confederation Bridge project. In 1995 while loading sand at Forestville, QC for Borden, PE the barge broke in two. It was later patched together and repaired.
McKeil Marine acquired the barge and rebuilt it as a self-loading/unloading pulpwood carrier. The box sides of the hold were lowered and a travellling gantry built to run on rails the lenght of the hold It carried a modified long reach excavator that would load or unload the wood.
On November 8, 2010 while in tow of the tug Florence M the barge broke free in a storm and ran aground at the entrancer to Pictou Harbour. It was carrying a full load of pulpwood from Anticosti Island to the Northern Paper Co mill in Abercrombie, on Pictou Harbour. Much of the wood was washed off. The barge was refloated November 29-30 and taken into Pictou, where it was declared a total loss due to extensive bottom damage.
The sister barge Betsiamites is still operating in the pulpwood and wood chip trade, with the tug Ocean Echo II, for Groupe Océan of Quebec City.
.
Posted by Mac at 8:01 PM