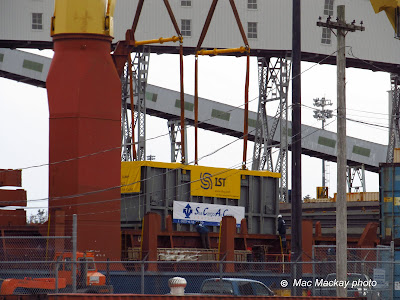 1. The second boiler disappears into the ship's hold. 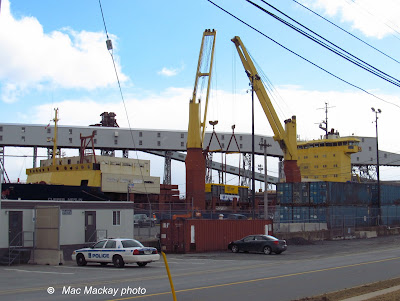 2. The ship is tied up at pier 24 where it lifted two boilers directly from rails cars into the ship.

Not Merlin the Magician, but Clipper Merlin, completed loading two boilers today. Wedged in at pier 24, it was not the easiest ship to photograph!
Yesterday's post showed the ship set up to lift, but it could not show the high winds that prevented the operation from going ahead. Things calmed down enough this morning so that the first boiler went aboard. The second went on this afternoon. Each of the ship's cranes was operated by an independanet operator, and a man at the hatch coaming directed them by radio and hand signals to coordinate their movements.
After lashing and securing below deck, the ship will sail this evening.
.
Posted by Mac at 7:55 PM