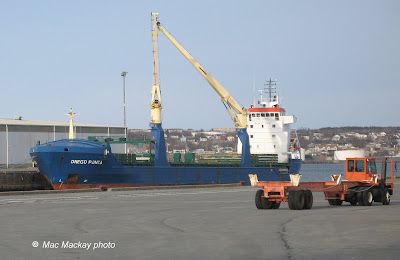 1. Onego Ponza at pier 27. The ship uses its own cranes to offload the cargo of rails.

Termed as break bulk cargoes are those which are not handled by container, are non-liquid, and are not bulk (grain, gypsum.) Halifax saw a decline in these cargoes last year.
One common break bulk cargo in Halifax is steel rails for CN Rail. They are unloaded at pier 27, sometimes directly to special railway cars, or stockpiled on the pier. The rails come from European steel makers, usually on ships of the Onego Shipping.
Onego Ponza is a German owned ship, flying the flag of Antigua and Barbuda, and on charter to Onego. It was built in 2002 and is 6,806 gross tons, 10297 deadweight.
[Ponza is an Italian island resort, famed for its Blue Grottos, built by the Estruscans.]
Posted by Mac at 9:20 AM