At the Aecon Fabco shipyard in Pictou the sailing ship replica Hector sits on the ways awaiting its first refit. The assessment of work is to be completed next week. See more on this interesting vessel at http://www.townofpictou.ca/hector_story.html . . The Town of Pictou has recently received financial support to re-open the ship to the public this year when the refit is finished. . Alongside, the navy tug Glenside has completed drydocking and an extensive refit that began last fall. Also at the yard is the tug Mary Steele which is likely there to assist with yard work. The McDermott (Secunda) suppliers Sable Sea and Hebron Sea are also in port in winter layup. . 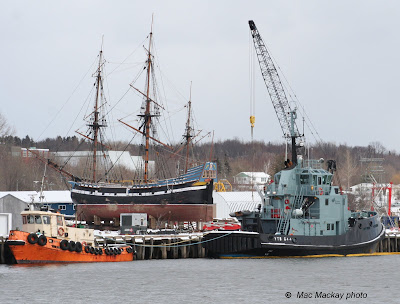 Meanwhile at nearby Caribou the ferries Confederation and Holiday Island are in winter layup. The season for them normally starts May 1, but Holiday Island is kept in reserve until the height of the tourist season. The white line on the horizon to the right is sea ice. 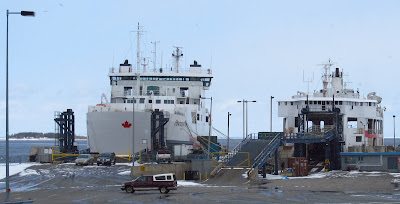 Northumberland Ferries Ltd has not published its 2011 schedule yet, but when it does it will appear at :http://www.peiferry.com/ [see Update on this topic April 9, 2011]