Who was Joe Tait? 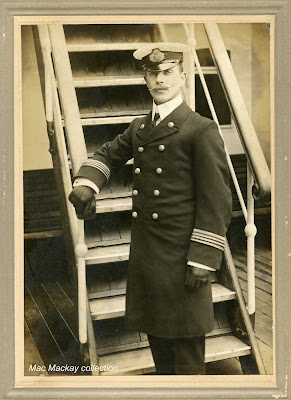 What good is a policy if it isn't defied from time to time? My policy is to show only my own photos on this site, mostly because of potential copyright issues. But I have a mystery here, so I will depart from the policy this time.
Somewhere I acquired a photo, which is inscribed on the back "Joe Tait, Chief, S.S. Royal George".
I know a fair bit about the Royal George, but nothing about Joe Tait.
The Royal George was built in 1907 by Fairfield Shipbuilding & Engineering of Govan, Scotland as Heliopolis for the Egyptian Mail Line to run between Marseilles and Alexandria. It was a twin funnel, triple screw, 20 knot turbine passenger streamer.
When the Egyptian service failed the ship was laid up in 1909. Canadian Northern Steam Ships Ltd bought her, and a sister Cairo, converted them for North Atlantic service and gave them the names Royal George and Royal Edward in 1910. Despite the removal of one deck she was still quite a lively vessel and acquired the nickname "Rolling George". Her first North Atlantic trip was May 26, 1910 from Avonmouth to Montreal.
On November 6, 1912 she stranded near St-Laurent, Ile d'Orleans, on the last inbound trip of the season, and sank to her superstructure. She was refloated and taken to Quebec where concrete coffer dams were fitted. She sailed December 23 for Halifax for more repairs to get her back home. She went on to Liverpool for permanent repairs and re-entered service June 17, 1913.
In 1914 she was taken up for trooping and carried various detachments of the Canadian Expeditionary Force to the UK. She also saw service in the Mediterranean, where her sister was topedoed and sank with heavy loss of life.
In 1916 the CNSS fleet was sold to Cunard, but the ship kept on trooping until the end of World War I. Her first peacetime trip for Cunard was February 10, 1919, Liverpool to Halifax.
August 19, 1919 she started running Southampton/ Halifax/ New York. She only made nine trips for Cunard, her last being June 10, 1920. After that she became an immigration depot in Cherboug until going to the scrappers at Wilhelmshaven August 14, 1922.
I am guessing that the photo dates from the ship's CNSS days, between 1910 and 1914. (The hat badge is not Cunard), and may even have been taken in Halifax in 1912, altough it doesn't look like winter. That is as far as I can go. So who knows about Joe Tait?
Posted by Mac at 10:16 PM