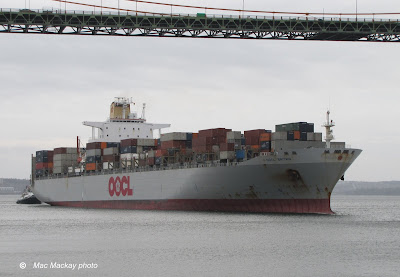 1. OOCL Britain passes beneath the MacKay bridge, with Altantic Fir on the stern.

The post-Panamax OOCL Britain sailed this afternoon very high on her marks. Either she unloaded a huge cargo in Halifax, or she is very lightly loaded. One explanation may be that she sailed from the far east at the time of Chinese New Year when manufacturing production is at a low point. Let's hope it is not a sign of things to come.
OOCL Britain was built in 1996 by Mitsubishi Heavy Industries in Kobe, is owned by Orient Overseas Container Line (through a single ship company) and registered in Hong Kong. She measures 66,046 gross tons and is rated for 5344 TEU.
.
Posted by Mac at 9:09 PM