1. Tugs scurry to catch up with Capricornus Leader. They will assist in turning the tug to head for Eastern Passage, then turn it again to come alongiside. 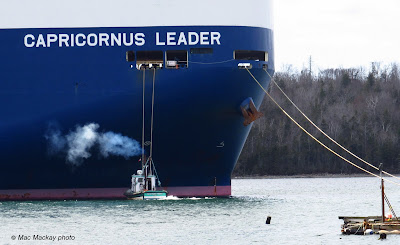 2. Autoport is of the few berths still using line handling boats. Here Westport Ferry has already set the head lines on a buoy and now takes springs for the pier.

3. Men wait on the end of the pier to take the springs.

4. The ship is alongside the Autoport pier.

Nippon Yushen Kaisa, better known for its initials NYK Line, is a major container line (140+ ships) a major bulk shipper (145+ bulk carriers) has cruise ships (3), tankers, and is the world's largest player in the auto carrier business (110+ ships). Among its fleet are a number of ships named for constellations, Capricornus Leader being today's arrival in Halifax.

Built in 2004, and measuring 61,854 gross tons, it is registered in Panama and managed by Wallem Ship Management of Hong Kong. Although Toyota is its largest customer, the line carries autos for other manufacturers too as its ships work their way around the world, back and forth to Japan.

Acting as line boat for mooring at Autoport is Dominion Diving's dive tender/workboat Westport Ferry. The wooden hulled vessel, built in 1965, retains its original name. It was built to push a ferry scow across Grande Passage between Freeport (on Long Island) and Westport (on Brier Island) at the tip of Digby Neck. That service is now provided by self-propelled ferry.