What is going on with Quest? 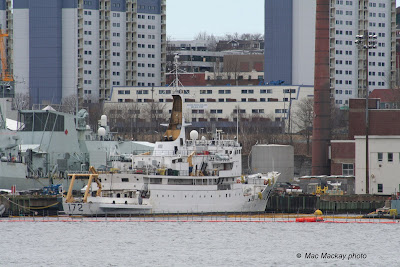 1. On Sunday Quest lies in the Dockyard, with a white funnel and new sponson on the stern. Not visible - the mystery black paint on her port side.

2. Quest prepares for haul out at Aecon-Fabco in Pictou. Unattractive plating on her superstructure was added in the 1997-99 refit. 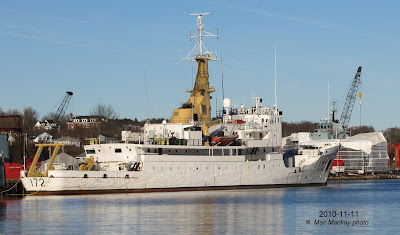 3. Alongside at Pictou - this side of the ship was not tampered with, and the sponson has not appeared yet. 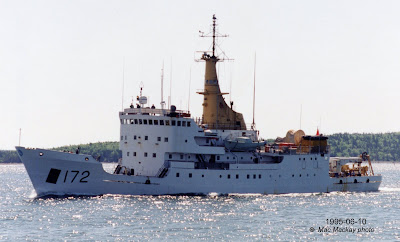 4. As built, Quest had a variety of square and round deadlights and an open side deck. In this photo her flying bridge has tarps rigged to provide some shelter.

The research vessel CFAV Quest AGOR 172 is attached to the Royal Canadian Navy and carries on research for Defence Research and Development Canada.
There was concern last summer when she had to be tied up for unspecified deficiencies. See:
http://shipfax.blogspot.com/2010/07/cfav-quest.html

However the ship was towed off to Pictou for a major refit, including about a month hauled out on the slip. When she returned to Halifax late in the year she was tied up for a while at Jetty Lima, in Dartmouth. She has now moved to the Dockyard, and here is where the mystery begins.
Soon after arriving in the dockyard, her " funnel" (a large structure combining her crows nest and signal mast, etc.,) which has always been a buff colour, was repainted white. She has also acquired a sponson near the stern on the starboard side.

It now appears that the entire starboard side of the ship has been painted black - the mystery deepens!

The ship was built in 1968 by Burrard Dry Dock in Vancouver, and was commissioned in 1969. It is powered by 4 Fairbanks Morse diesels, driving 2 General Electric propulsion motors, and displaces 2130 tons. The pennant letters AGOR signify an auxiliary vessel (civilian crew) for hydrographic and oceanographic research.