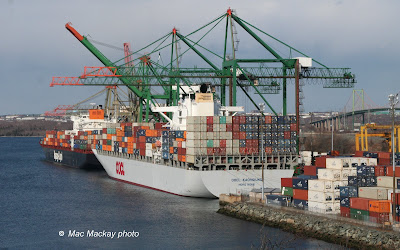 2. OOCL Kaohsiung dwarfs Rotterdam Express at the dock. The extreme with of the OOCL ship prevents her from passing through the present Panama Canal, but helps to account for her much greater carrying capacity. She also stacks boxes much higher on deck.

It was a quiet weekend containershipwise, with activity concentrated at Cerescorp's Fairview Cove terminal.
On Saturday OOCL Kaohsiung and Rotterdam Express shared the terminal and on Sunday OOCL Oakland had it all to itself.
OOCL Kaohsiung and OOCL Oakland are sisters, of a class of 11 ships built betwween 2003 and 2008 by Koyo Dockyard in Mihara, Japan. They are post-Panamax ships of 5888 TEU. Both are Japanese owned, but by different owners. OOCL Kaohsiung has the distinction of being named after a Taiwanese port, but registered in Hong Kong. OOCL Oakland is registered in Panama.
Rotterdam Express has a much smaller capacity at 4890 TEU, and due to its width can pass through the current Panama Canal.
This distinction will be lost next year when the enlarged Panama Canal begins operation.