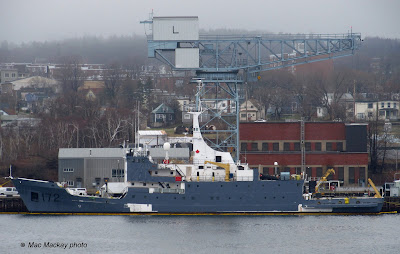 Prior reports about CFAV Quest's new paint were not backed up by pictures, due to the ship's location within HMC Dockyard. In the last day or so Quest has moved to the Dockyard Annex in Dartmouth, also known as the Gun Wharf and Jetty November Lima.
It seems that what was black paint is a very dark grey (or the black has been covered with dark gray.)

Her pennant number 172 has been painted on with black, so it would seem that this scheme may be here to stay for a while. At this point it is only on her port side, and even then not consistently applied. There also seem to be different shades of the gray - near the bow and waterline forward, suggesting that the painters may have been using up some paint from stock. In any event it is much darker than standard RCN gray, but similar to the gray used for yardcraft, such as the tugs.

As explained previously this is part of the Defence Research & Development's research into radiation.
See previous reference here: (be sure to click on "Comments")
http://shipfax.blogspot.com/2011/04/what-is-going-on-with-quest.html