CCGS Louis S. St-Laurent entered the Novadock floating drydock on schedule on Thursday April 21. She was soon high and dry and work commenced on her $2.9 mn refit, which is to be completed June 15. 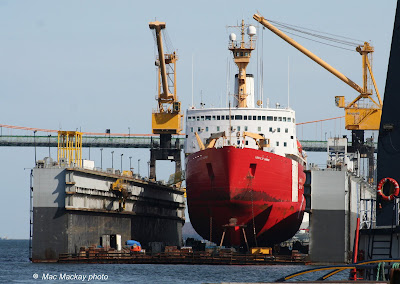 2. The only time the Louis was actually in ice and in Halifax. This is pre-midlife refit, April 1987. Her bow was completely replaced at that time. 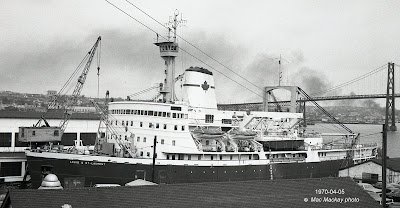 
The ship has a long history with Halifax, including her mid-life refit here, and numerous other refits and drydockings.

She has only once been called in to actually be an icebreaker here, and that was in 1987 when Gulf ice swept down the Nova Scotia coast and packed in to Halifax harbour, inconveniencing shipping for several days. The very rare occurrence was has only happened two or three times and is unlikely to happen again. She did not actually have to break ice, since the ice was broken already, but it was packing in due to tide and wind, and she was able to clear paths for traffic.
.
Posted by Mac at 2:35 PM