1. The now familiar Frisian Spring arriving 2011-04-25 for another load of utlity poles. 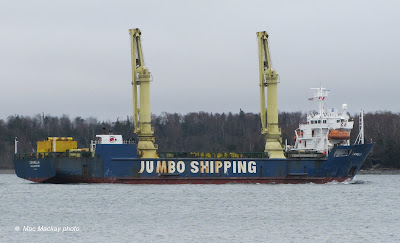 3. Daniella sailing today after taking on one heavy lift for Albany, NY.

4. Pioneer arriving this morning. She does not have the usual Flinter colour scheme, so is likely a managed vessel, rather than one owned by Flinter.

There has been a virtual parade of Dutch ships this week. The Dutch have an enviable reputation in the world for specialising in heavy lifts, dredging and ocean towing, but they are also now well known for their small ships. They have developed large fleets of gearless small general cargo/bulk carriers with ventilated holds, capable of carrying grain and other humidity sensitive cargoes including paper products, such as pulp and wood pellets.
First to arrive on Monday was Frisian Spring. This ship has a strange history. Its hull was built in Canada, but cost overruns resulted in the bankruptcy of its builders, Port Weller Drydock in St.Catharines, ON. It was finally completed in 2007 in the Netherlands. It has made several trips to Halifax to load utility poles. The poles are from trees grown in Oregon, which arrive in Halifax by rail and by truck. Frisian Spring then takes them to Ireland. She measures 4087 gross/ 6550 deadweight.
As soon as it was loaded and sailed, its berth was taken by Nirint Hollandia, a cargo/containership on its regular call to Halifax with nickel sulfides from Cuba.
Next to arrive was Eemsborg on Wednesday. It had a cargo of rail for CN. Built in 2009, it measures 7196 gross tons and is operated by the Wagenborg company of Delfzijl and sports the company's trademark red and gray hull colours.
Yesterday's arrival was Daniella, a heavy lift ship. It had unloaded refinery components in Toledo, OH and other material in Hamilton, ON before coming to Halifax light ship. It picked up one heavy lift unit for Albany, New York and sailed today. It has two cranes - open rated at 400 tonnes and one at 200 tonnes. It made short work of its one lift. Built in 1989, it measures 5818 gross/ 7580 dwt.
The next arrival was this morning. The Pioneer was built in 2010 and measures 6621 gross/ 11047 deadweight and is operated by Flinter Management. That company owns several ships, but also manages many others which are often owned by individuals or smaller companies. This tradition of pooling ships goes way back in Dutch history and is one of their trademarks.
Aside from the heavylifter, the ships are all built to a similar design. They have box like holds, with large, full width hatches. A gantry runs on rails to lift and move the hatch covers. The two prominent boxes on deck are ventilatiors, which permit controlling the humidity in the holds. They are thius very versatile and can carry a variety of bulk and breakbulk cargoes.