1. A skiff of snow pellets in the air, gives a hazy look to Federal Progess, taking bunkers from Algoma Dartmouth at noon today.

2. It was a little clearer earlier this morning. 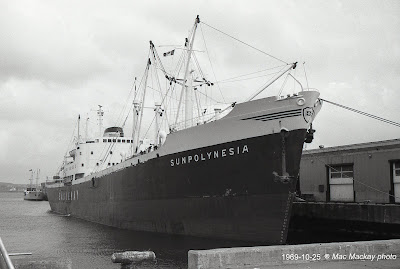 The gearless bulker Federal Progress put in for bunkers today - not an unusual event in the last few weeks, when we have seen a steady stream of bulkers for the same reason. The ship however has not been in Halifax for a few years, but was once a very regular visitor.
As Northern Progress, she was one of three ships owned by Alcan, and built in 1989 by Nippon Kokan KK in Japan, to carry alumina to the smelters in Quebec. They were built to Lloyd's Ice class 1A so that they could reach La Baie (formerly Port Alfred) on the Saguenay River year round. The port had previously seen only very limited winter traffic, and thus required huge stockpiles of ore to keep running for the winter.
The ships called in Halifax on most trips and usually sailed from here to Brazil or Jamaica.
In 2001 Alcan made the decision to sell their ships, and to charter them back to carry on with the same work, as they were so specialized. On January 25, 2002 this ship arrived in Halifax as Northern Progress and on January 29 sailed as Federal Progress. In the interim she spent an overnighter in the Novadock for a pre-purchase survey, followed immediately by sister ship Northern Venture, which became Federal Venture as a part of the same deal. (The third Alcan ship, Northern Enterprise, became Lowlands Saguenay.) The newly renamed ship sailed for Camsar, Guinea for the next load.
The distinctive Alcan funnel marking is now gone from the high seas, and of course as Rio Tinto took over, even the tugs in La Baie got the very business like Rio Tinto-Alcan wordmark.
Alcan had been in the shipping business for many years, and following World War II operated Saguenay Terminals, a major shipping operation that carried general freight and passengers between Canada and the Caribbean and South America. Halifax was a major port of call (especially in winter, when they did not attempt to navigate in the ice) and there were often two in at a time. The ships were a distinctive green colour, and their names were prefixed with "Sun". They were among the first ships with large banner lettering on their sides, proclaiming ownership and had aluminum painted funnel bands.
At first most of the ships were Canadian built and Canadian flagged. Over time Saguenay chartered in foreign ships. Some of the ships were also fitted to bring back bauxite in bulk , but others brought back general cargo including perishables. With the advent of containers, those activities wound down, and Saguenay Terminals ceased operations in the 1990s. Therefore the three bulk carriers were the last Alcan owned ships.
So today's arrival was significant, due to its links with a long gone era. Typical of that era was Sunpolynesia, a 8,970 gross tons general cargo vessel, built in 1957 at Eriksberg MV A/B in Gothenburg, Sweden for Einar Rassmussen of Norway, for a long term charter to Saguenay Terminals. It sailed for Saguenay until 1971 and carried the names Stella, and Alkmini A until broken up at Gadani Beach in 1984. She is shown tied up at pier 36 (Saguenay later used pier 9 extensively.) The pier is now within the Halterm container terminal area, and the sheds are long gone. Something rarely seen anymore, is a man working overside. October is a little late for painting, so he may be doing some sort of repair.