Princess of Acadia good for another year?

Princess of Acadia has completed her refit at Halifax Shipyard: 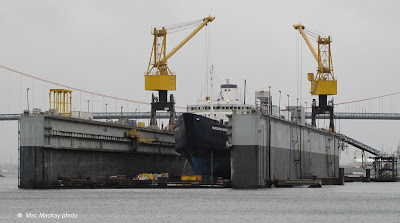 1. As of 8 am she was still high and dry in the Novadock , with anchor chains out. 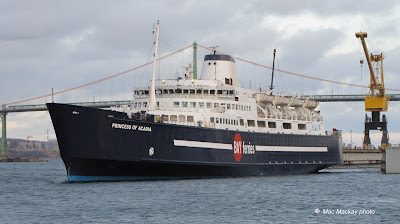 2. She clears the dock at 7 pm promptly. Her own crew will paint the upperworks, but the hull is newly repainted.

3. Her lines are still elegant, as she fires up her thruster. Her funnel discs have been removed, and her crew will have to reinstate those too. 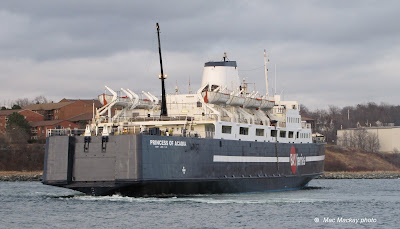 5. Heading out of the Narrows, the low sun shows a few dings in the hull. One notable one, high, near the stern., but she still looks great.

Included in the long list of ships that need to be replaced is Princess of Acadia. Built in 1971 by the much lamented Saint John Shipbuilding and Dry Dock Co Ltd, it replaced a ship of the same name on the 45 mile Digby, NS to Saint John NB run for Canadian Pacific Railway. Designed to carry 650 passengers and a combination of 159 autos/ 40 trailers, 7 tractors, the ship has done yeoman service under two owners and three managers.
In 1974 the ship was taken over by the Minister of Transport, and management assigned to CP. That lasted only until 1976 when management shifted to CN Marine, which was spun off as Marine Atlantic.
Bay Ferries took over management in 1997.
The service has been on life support for the last few years, with the governments stepping in at the last minute to provide emergency funding to keep the service going until a replacement ship arrives.
So far no replacement ship has been announced. Maybe during the current election someone will have to step up to the plate. No doubt they will announce a foreign purchase (again) because they failed to make plans in time to build in Canada.
Today's departure was delayed by high winds, and reduced visibility in snow squalls, but at 7 pm the ship stormed out of the dock - all on its own, without tugs- made a sharp turn to starboard , with her bow thruster going full tilt and her twin screws thrashing, and headed out to sea.
As a legacy of her railroad ownership days, she is still powered by her original four GM (V-16) 16-645-E5 engines, of 2875 bhp each. These were interchangeable with railway locomotive engines of the time, and can be endlessly rebuilt with ease. They drive twin screws with controllable pitch props at 18 knots+ cruising speed.
Lloyd's Register gives her passenger capacity as 641 unberthed, with 7 cabins and 9 berths. These later are VIP only as I understand it. Theses numbers do not include quarters for a crew of 28. Lloyd's also gives vehicle capacity as 155 cars, 36 "lorries." These are loaded by means of bow and stern doors.
.
Posted by Mac at 9:41 PM