Return of the Louis 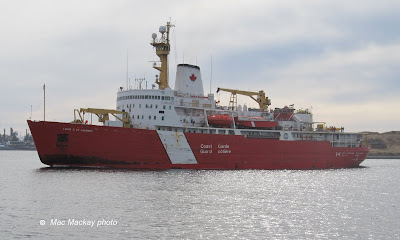 CCGS Louis S. St-Laurent returned to her old home port today for refit. The ship was transferred from Halifax to Argentia, but can only be drydocked in Halifax, so she has returned following her winter season in the St.Lawrence River and Gulf.
Canada's largest icebreaker still makes an impression anywhere she goes.
She will go to the Department of Fisheries & Oceans pier at the Bedford Institute to de-store, before heading to the shipyard for regular maintenance.

Originally commissioned in 1969, the ship was given a reprieve in 2000 when the Polar 8 icebreaker project was cancelled. She was then refitted to extend her service life to 2017 or thereabouts. Her replacement, to be named CCGS John G. Diefenbaker, is still in the design stage. Construction is supposed to begin in 2013 with completion by 2017.