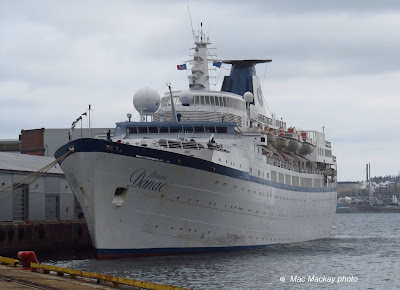 One normally associates cruise ships with warm weather. It was far from warm Saturday as the cruise season kicked off in Halifax, with snow flurries in the air and a bitter wind coming in from the sea.
Nevertheless Princess Danae arrived with the sun shining. By the time she was tied up and the passengers cleared to look around it had clouded over and was a typical Halifax April day.
Not one of the newer floating apartment blocks, this one was a real ship. It even has shear to its decks!
When I say, was a real ship, I mean that it was built way back in 1955, by the venerable Harland & Wolff Shipyard in Belfast, Northern Ireland (builder of the Titanic, and many other significant ships.) It was not built as a cruise ship however. It started life as the refrigerated and general cargo ship Port Melbourne for Port Line (a Cunard subsidiary) and plowed the waves between the UK and Australia/ New Zealand, returning with fruit and mutton, among other things. It also carried twelve passengers, and was considered to be high speed ship, since it cruised at 17 knots.
Built along traditional cargo ship lines, it had a delightful shear to the hull, but was fitted with two 6 cylinder H&W engines and twin screws. Her overlapping plates hark back to the days of rivets and cast iron, but it was those everlasting engines and twin screws that ensured her longevity.
She lasted in cargo trades until 1972 when Greek owners bought her to convert to a ferry, but by 1976 she has become a cruise ship. Since then she has been rebuilt once after a disastrous shipyard fire in 1991, and upgraded in 2006 to her present hydrid appearance. I am not so sure how successful the wheelhouse and funnel are, but she still shows some nice features in the hull.
She arrived in Halifax from Boston, with previous ports of call listed as New York, Baltimore, Norfolk, Charleston, Key West, Tampa and Galveston (March 23.)

Remarkably, she still has a sister ship, Princess Daphne (built as Port Sydney) also still sailing. It was also built in 1955, but by Swan Hunter & Wigham Richardson at Wallsend on Tyne.
The ship remained in port overnight and passengers enjoyed a rainy and windy Sunday in Halifax. In fact the wind kicked up such swells in Halifax that linesmen stood by the ship, and she may even have parted a line during the worst of it. She is schedule to sail late Sunday, conditions permitting.
There are several potted histories on line, and some fine photos of the ship as built: