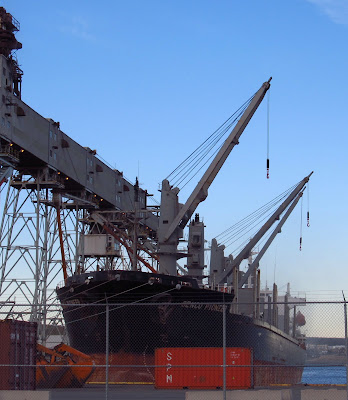 1. Boomless #2 crane remains in position, while the other three turn out to clear the hatches.

2. Cranes #1 and #2 face each other in the stowed positon, and it is hard to notie that #2 has no boom.
It was not noticeable when the ship arrived or sat at anchor in Bedford Basin for hold cleaning.
It was also not immediately noticeable when she moved to pier 28 on Sunday to position herself under the grain spouts.
However as soon as Genco Pioneer swung her cranes outboard to open her hatch covers it became obvious that the #2 crane does not have a boom.
This is not an issue when she is loading, but perhaps some day when she needs to unload, it will certainly slow things down. A replacement boom may well be waiting at a subsequent port of call.

I also noted that the grain spouts were in use today as she started to load. The last ship in however, African Dahlia, did not use the spouts, but instead relied on shore cranes and buckets to transload from trucks. Surely the slowest imaginable way to load a grain ship!