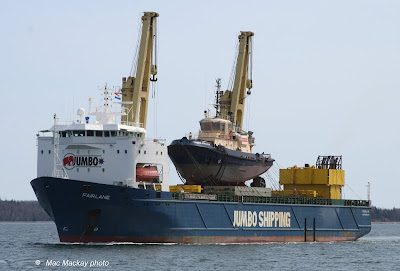 1. Fairlane sails up the harbour, with her unusual deckload. 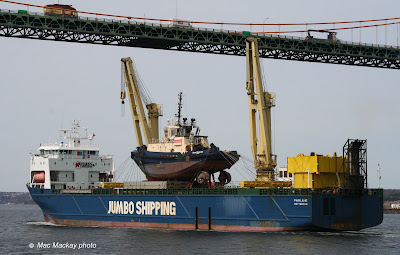 2. Heading into the Basin, the yellow ballast pontoons, and the lifting spreaders are visible on deck. 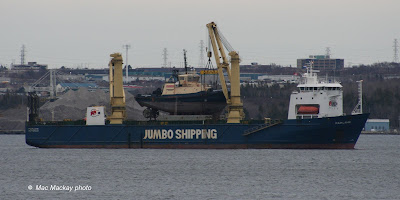 3. At dusk, one spreader has already been rigged, while the stern crane has lowered the pontoons into the water.

The Dutch heavy lifter Fairlane arrived today carrying the tug Fjord Éternité on deck. Sailing out of Svenborg, Denmark, March 23, where the tug had been stationed, the ship made a good crossing, It was originally due April 2, but likely slowed down to avoid a passing storm late last week.
Fairlane and sister Jumbo Vision are the two members of the H 800 class of versatile heavy lifters operated by Jumbo Shipping BV. See more on their web site:

With two 400 tonne capacity cranes, the ship has a combined lifting capacity of 800 tonnes, and can make short work of a tug! Built in 2001 in Turkey, the ship measures 7971 gross tons and 7051 deadweight tonnes. It is specially strengthened for heavy cargoes, and can be grounded.

The ship sailed up in to Bedford Basin and anchored, and by dusk the forward spreader had already been rigged and some of the securing lines had been slacked off. The large yellow ballast pontoons on its after deck had been lowered into the water using slots in the ship's hull. When partially filled with water, the pontoons act as external ballast counterweights when lifting.

Once the tug is off loaded (see more on Tugfax) the ship will shift to pier 31 to load locomotives for export to Europe.