A lightly loaded Vera D arrived for Melfli Lines and tied up at Halterm this afternoon. The ship is en route from Italy, Spain and Portugal for Cuba. This is its 15th trip for Melfi - Voyage #1 was November 24, 2014.

The 17,188 grt, 22, 513 dwt ship can carry 1519 TEU. It was built in 2004 on a hull by Daewoo Managalia, Romania, and completed by J.J.Seitas in Germany.  Launched as Pyxis it was renamed Maersk Veracruz on delivery to Peter Doehle Schiffahrts of Hamburg. It became Vera D in 2009.

Federal Oshima completed loading its cargo of wood pellets and sailed for Immingham, UK this evening. 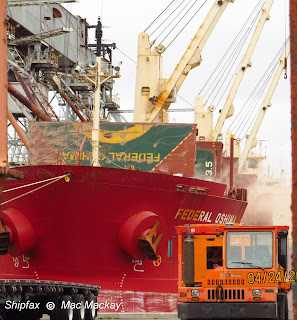 Surely there is a way that such cargoes can be loaded without creating so much dust. 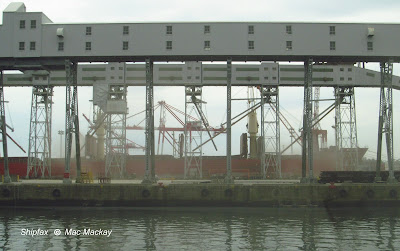 CCGS Sir Wilfred Grenfell left port for SAR exercises offshore. The Newfoundland based Search and Rescue vessel has been seconded to Halifax for the last several weeks. 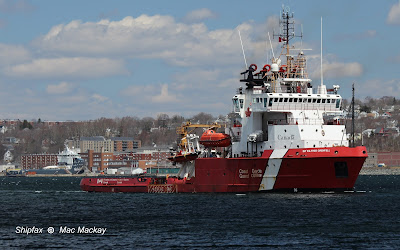 Sir Wilfred Grenfell sails with the old Coast Guard base in the background where the idled Jones Tide is tied up.

Built in 1985 by Marystown Shipyard, it was originally a supply boat, ordered on spec by the Newfoundland government to keep the shipyard afloat. In 1986 the government of Canada acquired it and converted the ship for SAR duties. 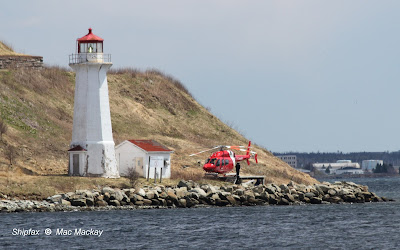 The new SAR ships will have helicopter capability. A CCG helo laded service techs on George's Island this morning.
A replacement for the ship is among five SAR vessels to be built by Seaspan under the  National Shipbuilding Procurement Strategy, but it it is several years off into the future, after Seaspan builds the Joint Support Ships for the navy, the Polar Icebreaker John G. Diefenbaker (to be renamed by the current government one expects-can you guess the new name?) and Ocean Research vessels.

Speaking of replacements there is still no word on how the navy plans to replace its Glen class tugs. Glenevis was going about its business in the harbour today, still in fine condition, but underpowered by today's standards. 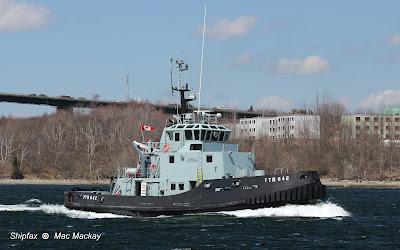 The new tugs will not be part of the NSPS program, and several Canadian yards have expressed interest in building the new boats.