There was such a variety of activity in Halifax that shipwatchers could have spent the entire day keeping track of it all.  Perhaps I can be excused for missing some of it - real life does intrude from time to time.

The early morning sun posed a challenge to catch the arrival of Atlantic Huron without deep shadows on the Halifax side. As the ship came up harbour it had to sweep out an around HMC Dockyard's  so called Force Protection Barrier. (More implied than real in winter, most of the floating fence is removed to prevent weather damage.) As the ship then swung back on course to pass under the Macdonald bridge, there was a chance to see the sunny side. 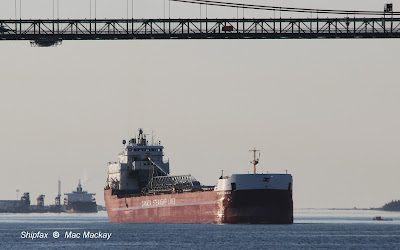 Some of HMC Dockyard's security fence - mostly the anchor buoys - shows on the right side of the photo. In the background the tanker Citrine finally unloads at Imperial Oil after idling at anchor in Bedford Basin since April 14.

The veteran Atlantic Huron has been threatened with retirement several times in recent years, but after a winter layup and drydocking it is back in service once again. Built in 1984 as a conventional gearless bulk carrier, it was converted to a self-unloader in 1989 and was rebuilt in 2003 by widening its hull 3 feet. 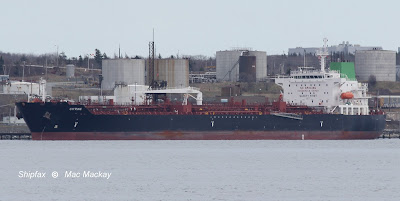 Citrine finally moved in the early hours of the morning. After a week at anchor, there was finally room in Imperial Oil's storage tanks for its cargo.

A second CSLer arrived later in the day, also destined for National Gypsum, and passed up west of George's Island permitting a close view on its way to anchor in Bedford Basin. 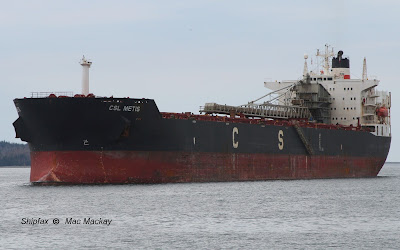 A regular in Halifax now, CSL Metis has been mentioned here often before. On its last visit April 12, it took a major bite out of the gypsum stockpile in Dartmouth, which has since been replenished.

The reason that CSL Metis passed west of George's Island this afternoon was the presence of the loaded crude oil tanker Cap Lara in number one anchorage, effectively blocking the eastern channel.

The 81,324 grt, 158,826 dwt Greek tanker, built in 2007 by Samsung, Koje, is en route to Quebec City with its cargo, but put in to Halifax for Asian gypsy moth clearance by the Canadian Food Inspection Agency. 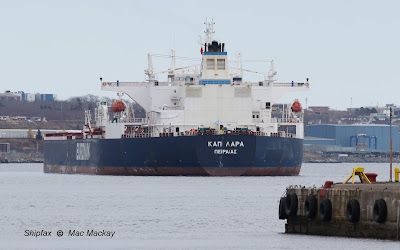 It's rare to see a crude tanker now that we don't have a refinery anymore, so its arrival was a bit of a treat. The ship apparently passed the test and sailed at about 1800hrs.

Another unexpected arrival was the heavy lift ship Palau.

Operated by Harren Ship Management's Combi-Lift fleet, the Malta flagged 11,473 grt, 9,962 dwt ship is fitted with two massive 450 tonne derricks capable of a 900 tonne combined lift. It has its bridge and accommodation forward to allow for unobstructed visibility when carrying large loads. The ship was built in 2010 by Taizhou Kouan Shipbuilding Co in Taizhou, China. 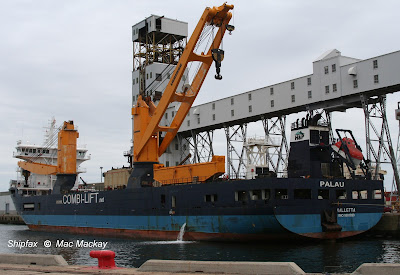 Once alongside pier 25 the ship shifted its ballast box forward to allow for work on its rudder.
The ship is fitted with a Becker rudder, which is a rudder with a steerable flap on the trailing edge to improve maneuverability. That flap has malfunctioned, and the tug Atlantic Oak was called upon to provide steering assistance as the ship made its way into port.
See: http://www.becker-marine-systems.com/03_products/products_becker_flap.html