Venture -a bulker, plus tankers and a few containers

The self-unloading bulker Venture anchored in Bedfrod Basin for bunkers today. The ship is the former Klavenes owned Balder. When Klavenes sold off its self-unloader fleet to CSL and Algoma last year, this ship went to Marbulk Shipping Ltds a copmany that is 50/50 owned by Algoma and CSL. 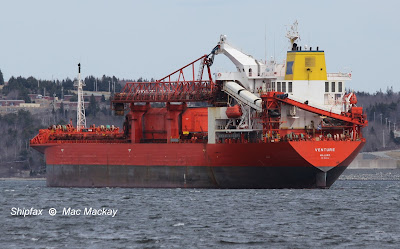 The 30,739 grt, 48,184 dwt ship dates from 2002 when it was built by Oshima Shipbuilding of Japan. It features a unique self-unloadfing system with a travelling shelter that contains the cargo reclaimer.  It has loaded gypsum in Halifax from time to time, but is more frequentlyu used to carry coal and aggregates where the deck housing is used to contain dust.

Since taking over the ship in January Marbulk has succeeded in painting out the Klavenes "K" on the funnel and paiting on the new name. Over time it will eventually get the black hull with blue funnel and golden seahorse used by Marbulk ships for many years.

Also at anchor in Bedford Basin, and also due to take bunkers is the tranker Citrine. Operated by Sinok Petrochemical Co Ltd of Soeul, South Korea, the ship was built in the same country by SPP Shipbuilding Co of Sacheon.  A typical handysize it measures 29,767 grt, 49,990 dwt. 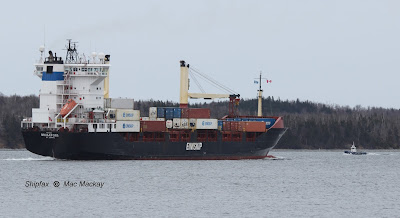 It was a slow day for containers with only the small Icelandic Steamship Co (Eimskip) carrier Bruarfoss calling at Halterm. On sailing it met the Halifax Tugger inbound from the Northwest Arm. The tug had already been to Bedford today, likely assisting the various yacht clubs to launch boats.

Bruarfoss was built in 1992 by Orskov Christensens in Frederikshavn, Denmark. It was launched as Maersk Forto but renamed Maersk Euro Quarto on entering service. It became Bruarfoss in 2001 and has been a frequent caller on Eimskip's Green Line service to Argentia, Halifax, Portland and Boston and  Iceland to Europe.
http://eimskip.is/EN/about/schedule/Amer%C3%ADkulei%C3%B0.html 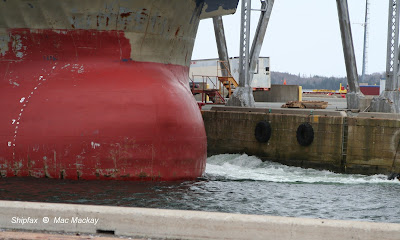 Using its powerful thruster and the tug Atlantic Oak to get off the dock the ship moved from the shelter of the camber there was quite a chop off the end of the pier as the ship moved into the wind.