Nordana Madeleine rises to the occasion

The Dutch flagged cargo ship Nordana Madeleine put in to Pier 9C early this afternoon. Shoreside crews wasted no time in starting the unloading process. The cargo consists of replacement drilling riser for the 2 kilometers of riser lost by Stena Icemax March 5. In that incident, the drill ship was disconnecting from the Cheshire well in bad weather 225 km offshore when  high waves and heave caused the riser tensioner to release the 2,000 meters of riser. 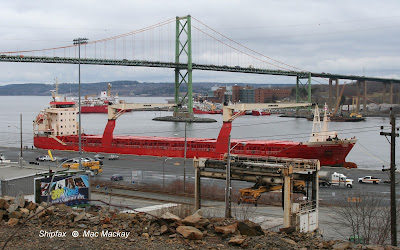 Nordana Madeleine ties up at Pier 9C, while an RST tank truck arrives with Irving fuel. The straddle carrier in the foreground serves CN's intermodal terminal.

The well, in the Shelburne Basin, had reached 6700m of its planned 7,532m and was safely disconnected, with the blow out preventer (BOP) positioned on the well head. However the multi-pipe riser, in 80 foot sections, with floatation collars, sank in 2,000m of water. Some of the buoyancy modules floated free but only one was recovered and eight were lost. None of the riser has been recovered as a far as I know. 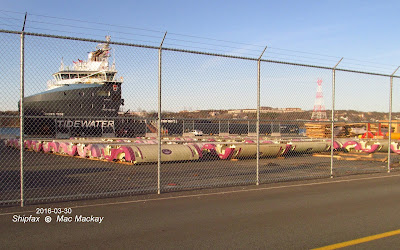 Last week buoyancy module shells were lined up on the pier ready for the new riser as the idled supplier Jones Tide waits for the work to begin. 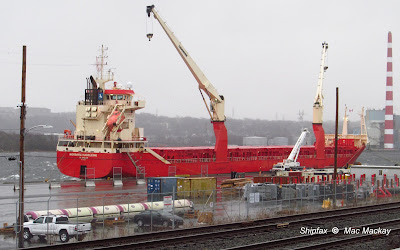 Nordana Madeleine's two 80 tonne cranes were used to unload the riser sections. An assembled riser and buoyancy shell can be seen in the foreground.

It is reputedly costing Stena Drilling, and possibly Shell, millions of dollars a day while not drilling. The replacement cost of the riser is in the multi-millions, plus the cost of shipping and reassembly. This is not to mention the four supply boats that are mostly idle when no drilling work is underway. The riser sections consist of a nest of pipes which deliver drilling mud, water, etc., to the drill assembly. There will be more than 80 of these sections to make up the new riser.

At the end of the work day this evening, another riser was in position ready for the top half of the shells to be installed.

The ship Nordana Madeline has been in Halifax before, but not under the current name. It was built in 2009 by Damen Yichang Shipyard in China as Jan van Gent. Under that name the 8,999 grt, 12,080 dwt ship worked for Nirint from late 2012 into 2014. It was then renamed for a new charter to Nordana Lines. It appears that another name change is in the works, but today's blustery conditions prevented the crew from getting to work. 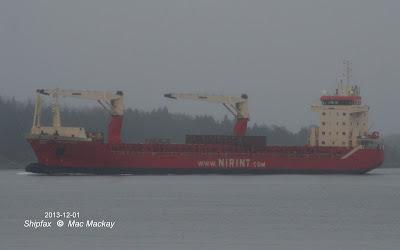 As Jan van Gent the ship was chartered by Nirint Lines for their Cuba service. It can carry 886 TEU or a variety of general cargo. 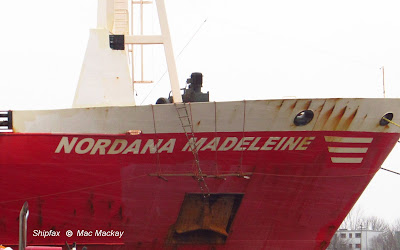 The angle of the ladder tells the story about how windy it was. There was also driving rain with splattery snow in the air.

The ship is owned by KOK BJ and registered in Alkmaar, Netherlands. Management is in the hands of Royal Wagenborg, who find charter work for the ship.