Arriving at pier 25-26 this morning the coastal class laker Algoma Mariner is carrying the season's first cargo of grain from the Great Lakes. 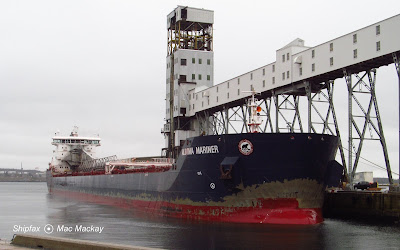 Algoma Mariner secured at pier 25-26, positioned to use its self-unloader boom to discharge into the grain gallery. Its cargo will be transferred by conveyors to the grain elevators.


Completed in 2011 by Chengxi Shipyard in China the ship was the first new Canadian laker built since 1985. The forebody of the ship was built in 2009 and it was intended to be joined with the after section of the Algoport. However that ship sank en route to China and a new after section was built and joined on in 2011. It is therefore a precursor of the Equinox class of lakers for Algoma Central Corp. These modern ships incorporate numerous 'green' initiatives and other efficient features.


Algoma Mariner is built to maximum St.Lawrence Seaway dimensions of 740' x 77'-11", but its hull design permits it to conduct coastal voyages to the Gulf of St.Lawrence and  beyond to such ports as Saint John, NB and Portland, ME.


The ship wintered in Mechins, QC sand was upbound on the Seaway March 29, and downbound April 9. The ship's cargo on this trip is feed (likely corn) for local consumption, loaded in Windsor, ON. grain, loaded at Thunder Bay. [Thanks to reader Andy for this correction.] 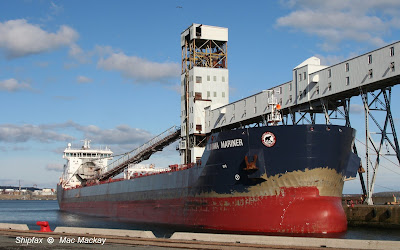 By late afternoon unloading was well underway and was expected to be completed during the night.
The unloading speed is governed by the capacity of the shoreside conveyor sysatem. The ship itself can self-unload at a rate of up to 5440 tonnes per hour depending on the cargo.