Stormy weather at the end of last week, and some mechanical "issues" meant some ships spent longer in port or arrived later than expected. Other ships opted to remain in port rather than sailing into bad weather. All this lead to busy times at the container terminals and in the Bedford Basin anchorages.

On Friday it moved out to anchor in Bedford Basin, joining Bahri Jazan which had moved out earlier to layover during the incoming weather.
It was too windy to board pilots for much of the day Friday and several ship werr delayed in arriving. These including NYK Constellation, Dinkeldiep and BBC London.

On Saturday, things had returned to normal and the North Atlantic veteran Atlantic Conveyor arrived on what may be its last trip.

It is debraggled looking as little effort is made to maintain the ship which is expected to head to the scrap yard very soon. 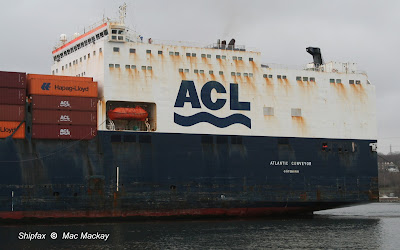 As it arrived the Atlantic Star moved out to anchor, having been in port since Wednesday with "mechanical issues". Atlantic Conveyor then moved alongside Fairveiw Cove. 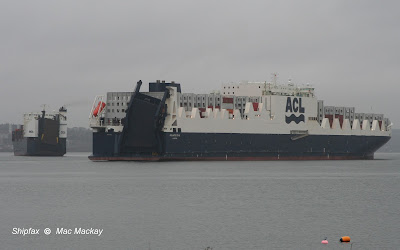 BBC London was busy at Pier 9C, unloading more riser pipe for Shell's exploration drill ship Stena Icemax. BBC London  was built in 2011 by Dongfang Shipbuilding Group in Yueqing, China as Rhoon. It was renamed in 2014. It measures 7138 grt, 7892 dwt and carrieds a pair of 80 tonne cranes that in combination can lift up to 160 tonnes. 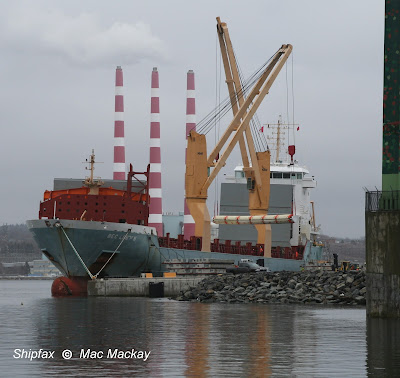 Unlike the first shipment, this pipe came with the flotation collars already applied. 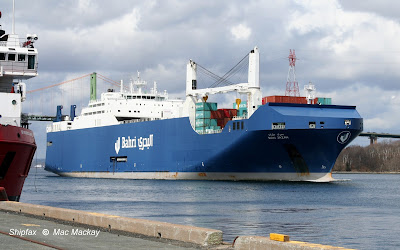 As Saturday wore on Bahri Jazan sailed, passing the CCGS Sir Wilfred Grenfell tied up at pier 9A. The ship spent early Friday morning wandering around Bedford Basin dragging anchor. A pilot was called in and the ship re-established its position. See Halifax Shipping News for a plot of its track.
While Bedfrod Bassin is well sheltered from the sea, it does not provide great "holding ground" for anchored ships. High sided vessels can often find themselves drifting in windy conditions.

After disembarking some technicians by service launch, Atlantic Star sailed at low tide. 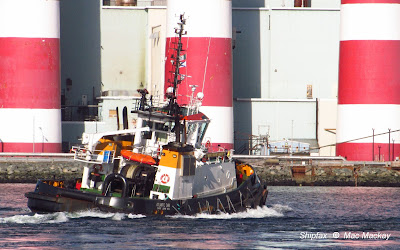 As it made its way through the Narrows, the stern tethered escort tug Atlantic Oak earned its keep by pulling the ship's stern around as it cleared the dogleg at pier 9. 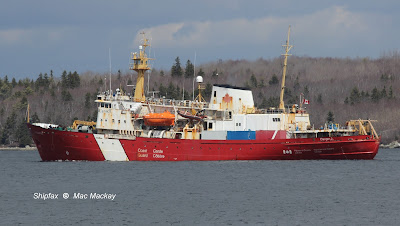 CCGS Hudson went out to Bedford Basin for trials, then cleared for sea.

At the McAsphalt dock in Eastern Passage the tanker Esta Desgagnés made one of its infrequent visits. Normally dedicated to Ultramar service on the St.Lawrence it does make the odd trip to these parts. After bunkering at anchor from Algoma Dartmouth in the afternoon, it returned to the dock then sailed Sunday morning. 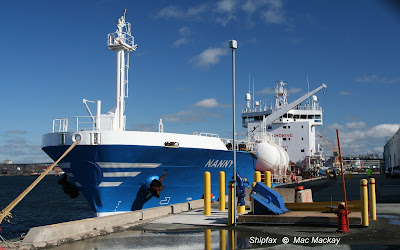 Nanny is becoming a regular at pier 9 with cargo from Come-by-Chance for Wilson's Fuel. It arrived Sunday morning and connected to the underground pipeline.

BBC London completed unloading its cargo of risers,seen neatly arrayed on pier 9C, and prepared to sail in the evening.

Another North Atlantic veteran Atlantic Compass made a westbound port call today to, making it a three ACL weekend. 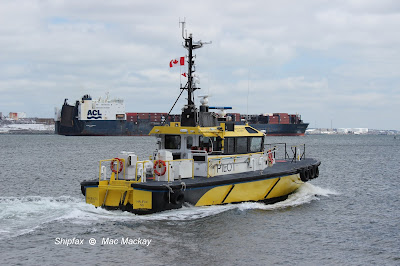 Chebucto Pilot sets out as Atlantic Compass sails. It is also carrying the pilot for the next inbound ship.

That ship was the post-Panamax (for now but not for long as the new canal is about to open) OOCL Kaohsiung for Fairview Cove.

A stiff breeze blowing across the Basin gave Atlantic Fir and Atlantic Oak a bit of a workout. 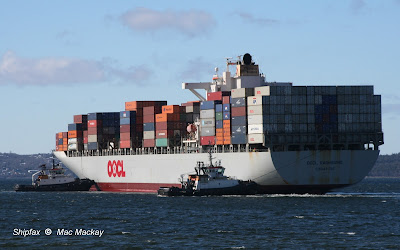 The last daytime arrival was Maersk Palermo in from Montreal. It would normally be here on a Saturday, but was likely slowed by the bad weather Friday and Saturday night.