Oriental action in south end: Asian Moon, Macao Strait, then to the Alps

Most of today's harbour activity was concentrated in the south end. Two of the ships had decidedly oriental names, but Caribbean connections.

At pier 42 Macao Strait was in port for Melfi Lines. The ship has been a regular since November 2014, and is now on its 11th trip to Cuba. 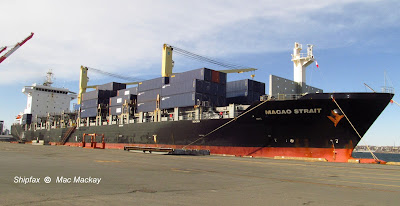 The ship is owned by Carsten Rehder of Hamburg, but registered in Madeira, a Portuguese offshore registry. It was built in 2008 by Taizhou Kouan in Taizhou, China. Its two 40 tonne cranes are swung out over the port side while it is in Halifax where shore side crane do the work of loading and unloading conrtainers. The 21,018 grt, 25,903 dwt ship has a container capacity of 1795 TEU, including 319 reefers.
The ship sailed from Naples March 30, with stops at Livorno April 1, Genoa April 2, Barcelona April 5, Valencia April 6, Lisbon April 9. It is due to sail tomorrow destined for Mariel, Cuba April 24.

At pier 31 Asian Moon is in port from Cuba, for Nirint Lines. It arrived at about midnight last night with another load of nickel sulfides. It was last here September 8, 2015 with a similar cargo. 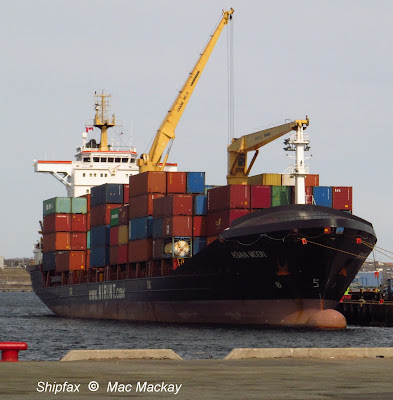 The third ship has a more Alpine name, although with an unfortunate connection to Halifax. The ship Mont Blanc and the Belgian relief ship Imo collided in Halifax in December 6, 1917 resulting in the Halifax explosion.

NB A recent book by Janet Maybee, "Aftershock: The Halifax Explosion and the Persecution of Pilot Frances Mackay" [Nimbus] goes a long way toward clearing the name of Mont Blanc's harbour pilot who was unfairly blamed for the accident.
The book has been nominated for two Atlantic Book Awards. The author will be presenting a talk on myths and truths about the Halifax explosion at the Maritime Museum of the Atlantic on Sunday April 24 at 2 pm.

BBC Mont Blanc was a late afternoon arival. The 8255 grt, 9363 dwt ship dates from 2011 when it was built by Tianjin Xingang in Tianjin, China. With a nominal container capacity of 660 TEU, it is more often used for general cargo and heavy lifts using its two 350 tonne capacity cranes, which can work in combination for a 700 tonne lift. 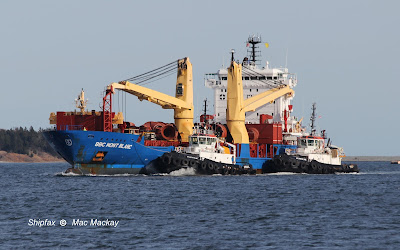 The ship took two tugs in order to squeeze into pier 30 just ahead of Asian Moon. Its cargo appears to be more equipment for the new McInnis Cement plant in Port Daniel, QC. The Bombardier Corporation project has been using Halifax to deliver large steel fabrications that are then trucked to the plant site. http://cimentmcinnis.com/en/ 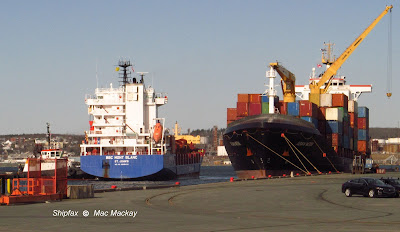 Tomorrow will be a busy one at pier 30 and 31 with both ships working.