Veendam - first cruise ship and other business as usual

The 2016 cruise ship season began today with the arrival of the Veendam. Built in 1996 as a Statendam class ship, it was refitted in 2009 with the extension of two decks aft and a "duck tail". Now rated for 1295 passengers (maximum) and 568 crew, it is still one of the smaller cruise ships we will see this year. 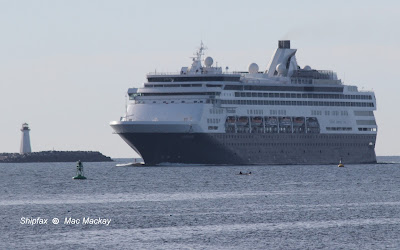 A pair of hardy kayakers greet the ship as is arrives for the first time this year.

A regular caller since 1996 it will have different fleetmates this year with the reassignment of former sister ship Maasdam. Instead Rotterdam and Zuiderdam will do the honours. In 2014 it had propellor problems and had to cancel three October cruises when it went into drydock for three weeks. 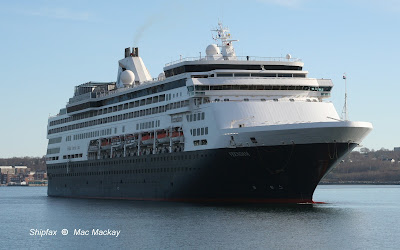 Veendam rounded north of George's Island on its way in to pier 22.

Otherwise it was business as usual in the port:

The Liberian flag Callisto followed and and anchored for Asian gypsy moth inspection. It is the third ship to arrive for clearance by the Canadian Food Inspection Agency. (MSC Cristiana was first March 20, and Cap Lara was the second last Saturday)

Built in 2010 by Yamanishi in Ishinomaki, Japan, the 15,861 grt, 25,981 dwt ship carries three cargo cranes. It is owned by Heinz Corleis of Germany and is bound from Providence, RI for Montreal.

In the afternoon the Canadian tanker Havelstern anchored for bunkers and will remain in port over night.

There was Naval and Coast Guard activity as SAR crews (likely CG college students) exercised with CCGS Sir Wilfred Grenfell outside, on returning to port, it tied up at the old Coast Guard base. 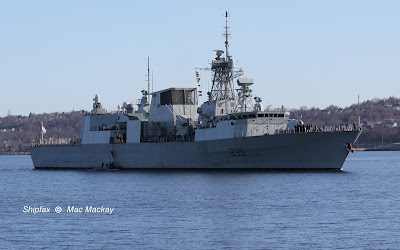 HMCS Charlottetown takes aboard several matelots from a RHIB as it sails. This was the mooring line party that let the ship go when it slipped its berth at HMC Dockyard. 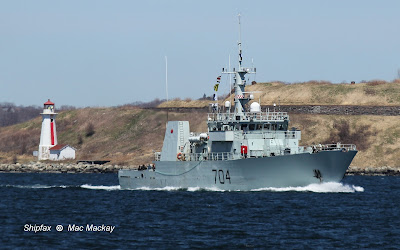