The simultaneous passing of the CSL Tacoma departing and Oceanex Connaigra arriving resulted in a rare starboard to starboard passing in the Middle Ground area between Meagher's Beach and Ives Knoll.

CSL Tacoma, a Trillium class self-unloading bulk carrier was built in 2012 at Chengxi Shipyard in Jiangyin City, China. At 43,691 grt, 71,552 dwt, the ship is too large to take a full load at National Gyspum due to limited draft alongside the pier.  However it did take a part cargo and was sailing for the US. After rounding George's Island it kept to the east of the main channel leaving lots of room for the inbound. 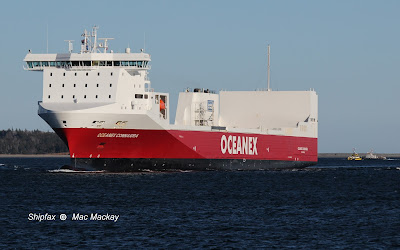 In the background the pilot boats exchange crews and boats at the end of a shift. Chebucto Pilot remains as the outside boat with the fresh crew, and A.P.A.No.1 returns to base with the off duty crew.

The inbound Oceanex Connaigra was heading for the Halterm container pier and it was more convenient for it to stay on the western side of the channel to make its approach to the pier, hence the starboard to starboard meet. It is a 26,786 grt 19,500 dwt ConRo built in 2013 by Flensburger Shiffbau in Germany. 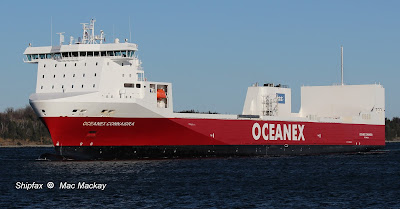 Oceanex Connaigra has shifted from its usual St.John's / Montreal run to the St.John's / Halifax service to cover for the refitting Oceanex Sanderling. Starting March 31- April 1, it is expected to continue until May 13 when Sanderling returns from Gibraltar. Since coming to the Halifax route it has made two extra mid-week trips in addition to the weekend calls - with the exception of last weekend when it did not show up.