Although the ship has been a regular caller for Hapag-Lloyd since February 2015 I never seem to catch it during daylight hours. Most ships like to arrive in the early morning and sail in the late afternoon or evening and winter lighting conditions make it hard to get good photos.

Today Allise P arrived at the pilot station at 1500 hrs, and transited the Narrows just at 1600. 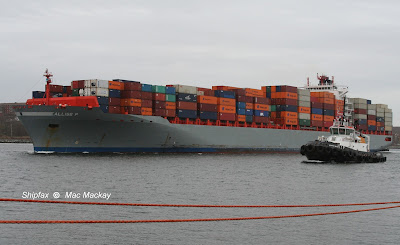 Atlantic Willlow paces the ship through the Narrows and is about to come alongside near the bow.

Once into the Basin the Atlantic Fir, the stern escort tug, swung the ship around with Atlantic Willow assisting on the bow. 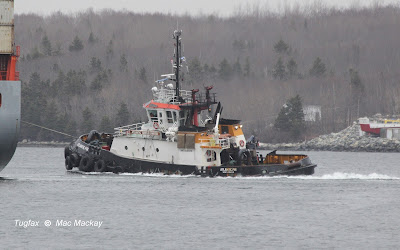 The Atlantic Fir is new to Halifax and at 5,000 bhp can handle stern tethered escort work, as can sister Atlantic Oak.

Allise P was built in 2007 by Hyundai, Ulsan for Stefan Patjens Reederei, GmbH as Maersk Dubrovnik. It operated in the China, Korea, India, Asia loop known as the Chennai Express.
The 5041 TEU ship took its present name in 2014 on completion of the charter to Maersk. It measures 53,481 grt, 53,900 dwt.