Following up from yesterday:

The heavy lift ship Palau was ballasted down by the bow this morning, which just bared the top control mechanism of the Becker rudder flap. 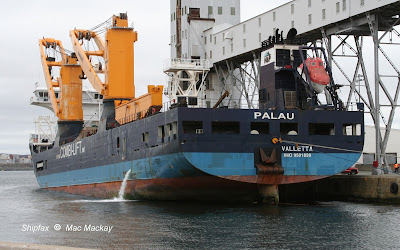 The flap was stuck at about a 45 degree angle to amidships, which would certainly be inconvenient for steering! 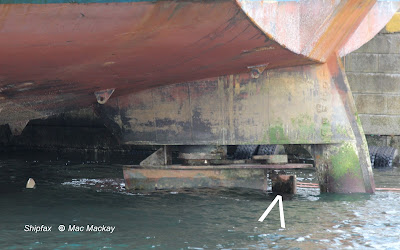 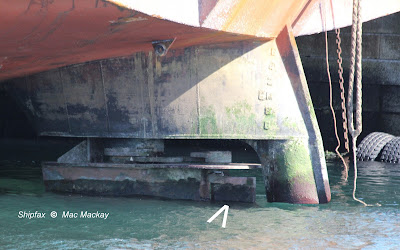 
By late afternoon the flap was back in line -whether repaired or just fixed in that position there was no way to tell. However blasting back to an even keel was underway and the ship is scheduled to sail later this evening, resuming its voyage to Hamilton, ON. 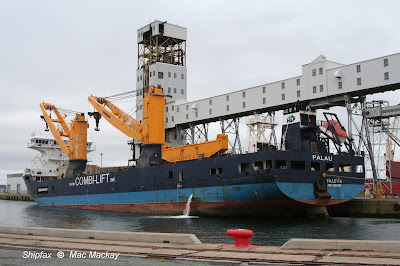 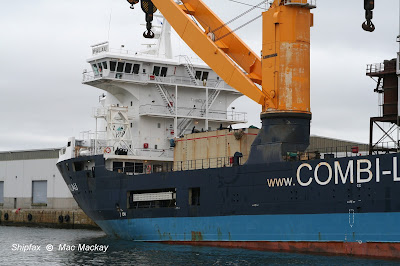 The ballast box is a pontoon which can be placed over side to counterbalance heavy lifts by filling it  with an appropriate amount of water.

Trimming the ship down by the bow was achieved at least in part by shifting the ballast pontoon (a box which can be floated overside) to well forward and slewing the cranes forward. Also some hatch covers were removed and stowed forward. 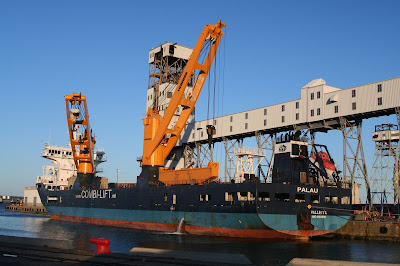 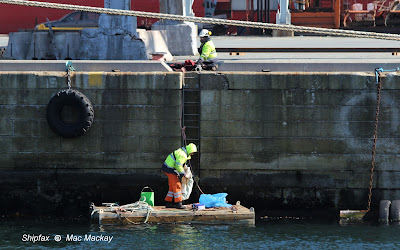 With the ship back on an even keel workers pack up their gear and the ship's crew is repositioning hatch covers and 'tween deck covers..

Another interesting feature of the ship was revealed when it was ballasted down. A very prominent ice knife is fitted above and abaft the rudder. Rudders can be jammed by ice, particularly when backing. I suspect the Becker flap rudder is even more susceptible, and thus needs even more protection. 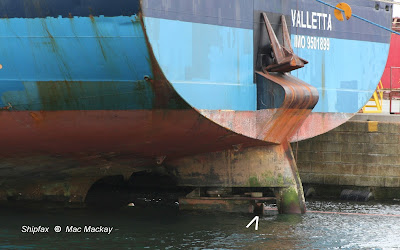 The ship is also fitted with a stern anchor, a requirement for transiting the St.Lawrence Seaway, but also a useful appendage when loading or unloading at an anchorage. A large blister below the anchor is needed to keep it clear of the ice knife.

The tanker Doric Pioneer arrived last evening and anchored in Bedford Basin until this afternoon. On departure of the Irving Oil tanker East Coast it moved to Imperial Oil's number 3 dock.


The only recorded arrival today was the Skandi Flora, returning from the Stena Icemax foe another load of drill riser. The supply boat has been conducted a constant shuttle of the new riser out to the drill ship transferring the replacement riser sections. 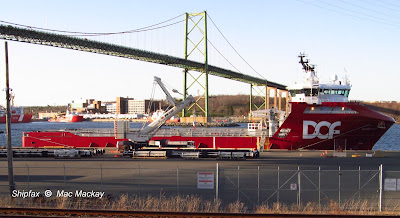 Skandi Flora at pier 9C, ready to load the remaining riser sections for the Stena Icemax.

Even when the new riser sections and other related gear are all aboard the drill ship it remains to be seen when it will resume drilling for Shell. The Offshore Petroleum Board has been quiet on when that will be allowed to take place.