The tanker Skyros moved out from Imperial Oil to an anchorage today and was expected to sail this afternoon. However that did not happen, and no new ETD has been posted. 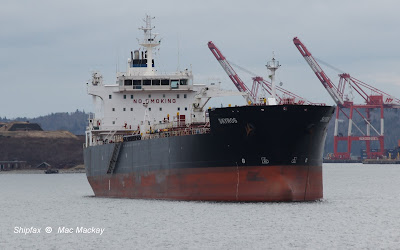 Note the silhouetted crew members standing bridge watch while the ship is at anchor.

Meanwhile the ferry Christopher Stannix was busy shuttling back and forth on the Woodside run. The Woodside route, normally served by two ferries, was down to one boat this morning and thus running on a half hour schedule. Halifax Transit cited "staffing issues" for the service reduction.
It does seem odd that they could not find staff willing to work. Could this be a polite way of saying that they have some labour relations problems?

In the background several McNally Construction barges are spudded down off the old Coast Guard base in Dartmouth.