Like most many shipping companies HAPAG-Lloyd has a theme for its ship's names, Nowadays its container ships use a city name and the word "Express". The cities chosen are important trading, manufacturing or business centres or ports, and there seems to be a limited number of each. Therefore the names are re-used. New ships are often assigned the names of the most prestigious cities, sometimes commandeering the names from existing ships which are then given the names of lesser cities. (This is how we finally got a Halifax Express in 2002, After being a city in waiting for decades a new New York Express usurped the name from an older ship, which was demoted to our city.) 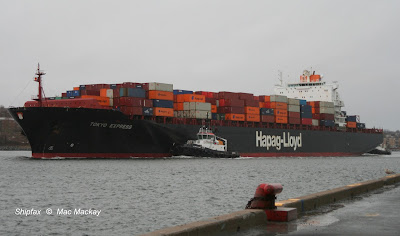 Today's arrival has always carried the name Tokyo Express since it was built in 2000 by Hyundai Heavy Industries Co Ltd in Ulsan, South Korea. The 54,465 grt, 67,145 dwt ship, with a capacity of 4890 TEU (including 370 reefers) may lose its name when a newer larger ship needs to be named for an important city. Ships of her size are considered inefficient in this age of meaga ships, so that could happen sooner rather than later.

The ship is not the first ship named for that port, however its predecessor used a German spelling. Tokio Express came from Hamburg's Blohm+Voss Steinwerder yard in 1973. At 57,802 grt it had a more modest 49,532 dwt and a container capacity of  just 2894 TEU. It was powered with steam turbine machinery developing an impressive 81,132 shp for a speed of 23 knots. 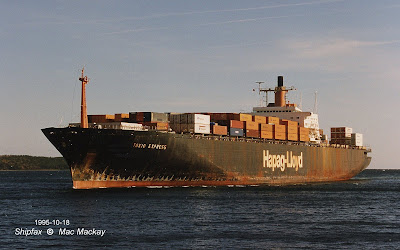 The newer Tokyo Express makes do with a 7 cylinder Burmeister+Wain diesel engine, built under license by Hyundai, of 54,438 bhp. Despite ship's greater cargo capacity it is rated for a 23 knot cruising speed. The improvement in engine and hull efficiency alone over a 25 year period is remarkable. 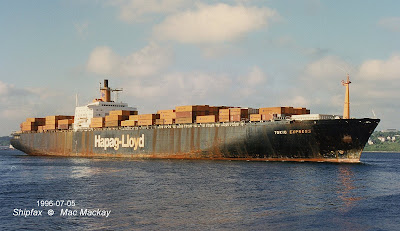 The earlier Tokio Express was reassigned for a year in 1984 and renamed Scandutch Edo, but reverted to Tokio Express again in 1985 and served out its years as such until it arrived in Jiangyin, China for scrapping January 10, 2000. It was a regular caller in Halifax in the mid 1990s.