With the return of reasonable weather the large backlog of arrivals and departures began to move today. Pilotage operations had been suspended for about 24 hours and many ships had opted to stay in port before that. Arrivals began to trickle in too, as ships that had stood off were able to come in. Others had simply hove to or slowed at sea to avoid arriving too early.

The long list of departures included Oceanex Sanderling and Nolhan Ava heading east to Newfoundland and St-Pierre, would normally have sailed Friday evening. The tankers Jinan, and Nor'Easter, and the container ship Catherine Schulte, and cargo ships Augusta Unity amdf Baltic Leopard. The last named was delayed loading its grain cargo due to rain and snow, and after loading all day to today is due to sail this evening. USS Wichita also sailed, having sat out the storm in comfort at HMC Dockyard.

Jinan (centre) turns for the pilot station outbound, while inbounds CMA Medea (right) and Shanghai Highway (left) are spaced out for arrival. 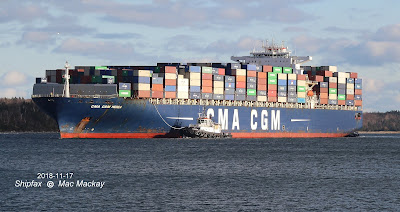 CMA CGM Medea appeared well loaded on arrival, with all containers apparently intact despite having come through some of the worst weather of the year.

There was one surprise visitor yesterday - mostly unnoticed. Since it did not require a pilot its arrival was not posted on the usual sites. The tug Strait Raven, based in Port Hawksbury [ see Tugfax 2018-10-10 ]  arrived towing the newly built cable ferry Belle Isle Belle. 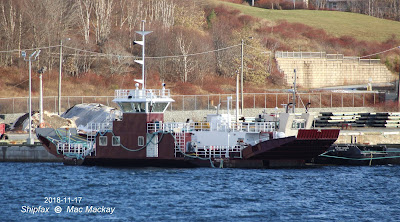 Belle Isle Belle (brown and white) and the Strait Raven (cream and charcoal) at The Cove (former Coast Guard) base in Dartmouth. Note the emergency towing line (blue) strung along the side of the ferry, to be retrieved in case the main line breaks.


The ferry is Hull Number 1 for the new Océan New Brunswick shipyard in Bas-Caraquet. The $6.5mn vessel has a capacity of 15 cars and will operate on Belle Bay between Route 124 and 850. It will replace the ferry F85 which will be transferred to the seasonal Kennebecasis Island service, in turn displacing a leased craft. The name, although sounding unimaginative at first makes sense because the ferry is a doulbe ender.

The Groupe Océan shipyard, is also constructing a floating drydock to be owned by the Province of New Brunswick. That $12.5mn project is to be completed in the spring of 2019 and the dock will then be leased to Océan for 20 years with an option to buy.